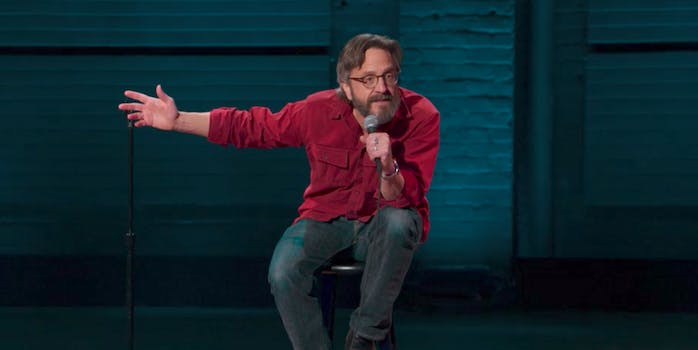 ‘Marc Maron: Too Real’ finds humor in the mundanities of everyday life

'I don’t know how much time I have left.'

That’s how long it takes Marc Maron to lament the state of the union in his new standup special, Marc Maron: Too Real. And that includes an extended shot of the comedian taking a whiz backstage before facing his audience.

“I’m terrified to refresh the news browser on my phone,” the WTF with Marc Maron host admits about following the daily debacle that is Donald Trump’s presidency. “It must be akin to an abusive stepfather kicking your bedroom door in just to go, ‘I’m burning the house down!’ And then he walks out and shuts the door behind him. And you’re sitting there with your phone, going, ‘I should go, right?’”

The outburst passes, and Maron makes it clear that he doesn’t intend for his new special to be overtly political. He simply addresses the elephant in the room early so he can get to the real source of most of his grief these days: himself.

“How do you have fun?” Maron asks the crowd. On one hand, it’s a wryly rhetorical question designed for laughs, but to hear the comedian tell it, he genuinely doesn’t have an answer. Maron finds inspiration in the mundanities of everyday life, bemoaning his mother’s inappropriate emoji usage and heroically recounting the time he left a Rolling Stones concert early to beat the arena traffic. Comedians constantly seek meaning in their own mortality and banal circumstances, but Maron’s jokes avoid frivolity while also steering clear of nihilistic old geezer territory. (Leave that to Lewis Black.)

Instead, the grizzled comedian settles for chronically agitated, repeating exasperatedly throughout his 70-minute set, “I don’t know how much time I have left.” It’s become something of a personal mantra for Maron, who, at 53 years old, no longer has the time or desire to try new things. It’s too late for him to get into Phish. He couldn’t watch a new TV show even if he wanted to, because navigating the myriad streaming services is damn near impossible. Oh, and save for a life-changing catastrophe, religion doesn’t seem to be in his future.

“The wheels would really have to come off for me go find God at this age,” he admits. “I think I’m spiritual, maybe, I don’t know. Nah, probably not.”

This cynical, been-around-the-block persona is old hat for Maron—he essentially plays the same role in Netflix’s GLOW as Sam Sylvia, a third-rate indie film director who grits his teeth and makes a female wrestling show for daytime television in order to fund his perverted pet projects. In fact, his attitude in Too Real is so familiar that one has to wonder if he was even acting in GLOW, or simply reacting to the script as he would in real life.

Yet if Maron scores big laughs for his profane rants, it’s his self-awareness and reluctant sincerity that lend depth to his standup material, just as they did with his GLOW performance. He punctuates his monologues with self-effacing quips and often laughs alongside his audience, his willingness to revel in his own ridiculousness making his jokes all the more charming.

Take, for example, Maron’s winding story of a man who buys a dumb hat and constantly reevaluates its place in his life. He tells the joke twice, the second time reworking the story into the plot of a children’s book about a “stupid, silly, sad man” who wrongfully assumes that buying a hat will give him a sense of fulfillment. It’s indulgent, sure, but Maron’s delivery is hilariously mesmerizing, and not a second feels wasted.

Frankly, that’s about the best he could ask for. In an era of media super-saturation, short attention spans, and countless hot takes, Marc Maron: Too Real succeeds as as a purposeful, engaging standup special from start to finish. At one point, Maron reads off a Post-it Note on which he scribbles ideas for potential standup bits: “We will all be immortalized as content.”

If that’s the case, this ain’t a bad way to be remembered.