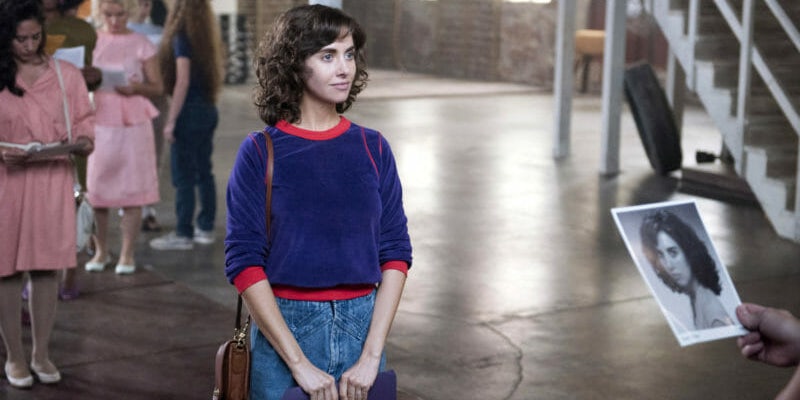 Let me hear your body talk: A chat with the ladies of ‘GLOW’

14 lady wrestlers take the ring in this Netflix original based on the infamous '80s league.

A memory struck while watching GLOW, the fictional new Netflix series based on the ‘80s female wrestling league. A former babysitter would watch it on Saturday nights—she smoked and liked hair metal. Alone, I practiced wrestling moves on my canopy bed. I liked the show’s “bad” girls, but considered myself a “good” girl.

The women of the original series were explicitly cast as good or bad girls, but were also sexual, physical, comedic, political, and allowed a stage for their rage. In the reboot, executive produced by Orange Is the New Black creator Jenji Kohan, Alison Brie (Community, Mad Men) and Betty Gilpin (Nurse Jackie, American Gods) are the bad and good girl, respectively. At least at the beginning. The series takes its time finding the 14 wrestlers and shaping their personas.

In a roundtable interview at ATX Television Festival, Brie, Gilpin, and showrunner Liz Flahive (Nurse Jackie) discussed the show’s archetypes. Brie was wearing a white T-shirt that said “Villain,” a nod to her manufactured role. We’re introduced to Brie’s theater-obsessed Ruth via an audition that sets the tone for the whole show. (During another Q&A at ATX Television Festival, Brie detailed her own cringeworthy Entourage audition.)

None of them had previously heard about GLOW, which ran from 1986 to 1990. Flahive said the idea started coming together once she and co-creator Carly Mensch watched the touching 2012 documentary GLOW: The Story of the Gorgeous Ladies of Wrestling, which explores the origins of the series and catches up with many of the wrestlers. The new series adheres to some of the archetypes from the original show (Brie as the Soviet menace, Gilpin’s Debbie as America’s sweetheart). It also explores the stereotypes the original GLOW brazenly portrayed: Real-life wrestler Kia Stevens stars as Welfare Queen, Sunita Mani as Beirut, and Ellen Wong as Fortune Cookie. Marc Maron’s a stand-in for Matt Cimber, the director who helped shape the often-controversial tone and content of GLOW.

Unlike sister series Orange Is the New Black, GLOW doesn’t (yet) rely on flashbacks to tell the women’s stories and doesn’t dive too far into the inner lives of its characters across 10 episodes. Ruth and Debbie are positioned as the dramatic hurdle after a soap opera-style betrayal corrupts their friendship. The idea of wrestling demons is writ large.

Brie liked the “push and pull” of Ruth’s confidence, and could relate to it as an actress slogging through auditions and wondering if she’d work again. “All 14 of the women are at the end of their rope in their own specific way,” says Gilpin. “And find wrestling when they’re at that very vulnerable place.”

We see women in vulnerable places, deflecting (and sometimes embracing) the industry’s racism and sexism. The series lags a bit in the first half, as Betty and Ruth’s interpersonal drama starts to overshadow the ensemble. There are characters that feel like they need more screen time or elucidation, like the inscrutable Sheila the She-Wolf and Machu Picchu, the daughter of a wrestler.

Flahive says the show is about “watching these real women connect with each other.” She wanted GLOW to be a “very physical show about bodies, about different types of bodies.” The women trained with Chavo Guerrero Jr., whose uncle Mando trained the original cast, and Brie says training opened up her confidence not just as an actor, but as a woman.

Gilpin explored that further: “I was scared to film GLOW for many reasons. As an actor, as a wrestler. It was just a very scary and intimidating experience. And to have, every day, physical contact with my scene partner, where it felt like powerful swimming together, guiding each other’s bodies to the ground—I felt my body talking and listening for the first time in my life to another female body in a powerful way.”

By the final episode we finally see the women in the ring, and it opens up the show. Wrestling-as-soap-opera works to a degree, but getting deeper into these women’s lives—and beyond the good and bad girl—is GLOW’s next hurdle.