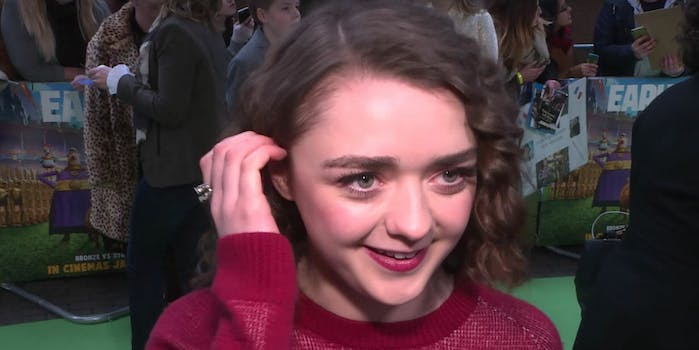 Maisie Williams worries she has the wrong ‘look’ for leading roles

It’s easy to be a fan of Maisie Williams. Not only is the 20-year-old English actress an unstoppable force as Arya Stark on Game of Thrones, she’s an outspoken supporter of gender equality and a burst of sunshine in interviews and comedy bits, especially when hanging out with her co-star and friend Sophie Turner.

Yet Williams expressed worries to the Irish Times this week that her appearance might hold her back from some more prominent roles in Hollywood.

In addition to filming Game of Thrones season 8, Williams recently starred as the voice of Goona in the animated movie Early Man and will play a terminally ill teen in the bucket-list film Departures due out this year. She also joined Turner in the X-Men universe nabbing a role as Rahne Sinclair (Wolfsbane) in 2019’s edgy The New Mutants movie.

But while Williams has had no trouble landing roles fit for a teen, it seems she’s finding limitations as she matures into an adult.

“Don’t get me wrong. I’m completely in awe of Hollywood’s leading ladies,” Williams said. “I love looking at those totally jaw-droppingly beautiful women. But I think it’s sad that you only get to see one type of beautiful on screen.”

While Hollywood may still suffer from entrenched beauty standards and unequal treatment of women, we’re seeing signs of change. More women are demanding equal pay and calling out casting directors who criticize their weight when it has nothing to do with their characters. With strong women like Williams leading the way, we may see more than “one type of beautiful” on screen more often—and the sooner, the better.