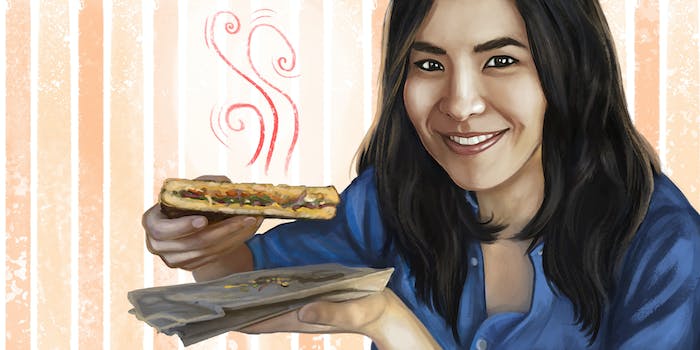 Hollywood star and #WCW Lynn Chen is not your average foodie

Chen is challenging standards and stereotypes, one platform at a time.

Lynn Chen credits her first performance, age five, at the Lincoln Center for getting this entire ball rolling. These days her resume is as diverse as the food videos she compiles via television, film, stage, and digital media. But Chen is not your average Hollywood celebrity, or your average food-obsessed Los Angeles Instagram star.

After years of battling an eating disorder and depression, Chen is using her experiences to shatter society’s notions of the “perfect body,” and through her redefined relationship with food, inspiring women around the world to follow suit.

Chen’s accolades run deep, with recent roles in Fear the Walking Dead and Silicon Valley; popular blog and podcast, The Actor’s Diet; and continued work on YouTube with both her own channel, as well as collaborations with ISAtv, BuzzFeed, and Tastemade Facet. She played the villain Goh Xiulan in Call of Duty: Black Ops III, and in 2013, for her work as an ambassador to the National Eating Disorder Association, Chen was named the “New Generation of Social Activists” by Marie Claire.

But she started her personal YouTube channel as a place to document and share her food adventures.

“I love that food has become a way to allow me to connect to people—we all have to eat—and gives me something to focus on when I’m not acting,” Chen tells the Daily Dot. Her videos are a family affair, with appearances and recipes shared from in-laws, cousins, nephews, and parents. In one of my favorite series, her Disneyland behind-the-scenes for BuzzFeed, Chen collides her love of Disney and food into tips and tricks to navigating the park’s food scene like a pro.

As a presenter, Chen is instantly likable, which can be credited to just how relatable she feels. She’s impressively found outlets for all her passions, and while she’s honest about the challenges of juggling them all, it inspires seemingly everyone who tunes in. Her advice for those who are passionate, but perhaps intimidated by the competition of Hollywood is to stay true to their vision.

“[T]he entertainment industry is always changing. So anybody who tells you they’ve got it figured out today will most likely be wrong tomorrow. Just keep doing your thing and take a break if you need to. There’s never any harm in stepping back when it all gets to be too much,” she says.

As an eating disorder survivor, Chen has talked at length about the pressure she often felt growing up to look a certain way. This pressure, coupled with her experiences growing up in a culture where food is a vital part of tradition and social etiquette, spurred her to address the contrasting intersections between food and body image in the Asian-American community. She often speaks at colleges and conferences about the unspoken presence of eating disorders.

“YouTube gives people a platform—I love how many young Asian-Americans feel free to speak their mind and express their creativity,” Chen says.

Her refusal to be pigeonholed into one type of Hollywood character has continued the fight for more accurate media representation. Whether you follow her for food reviews, stories of perseverance, or to hear more about women in media, Chen offers a little something for everyone. Grab a moon pie and get to streaming.