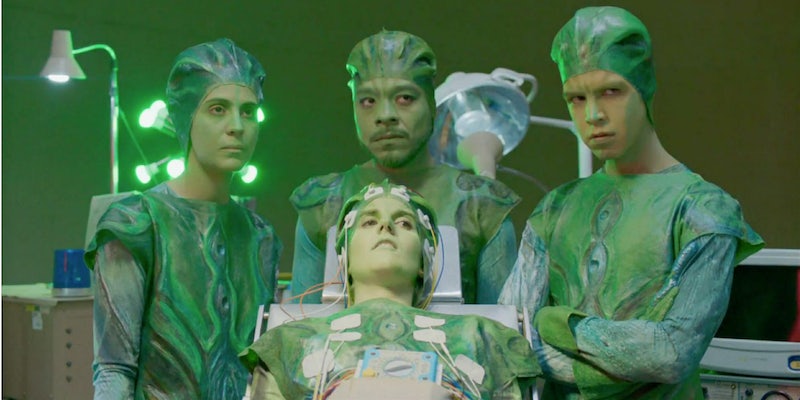 A new era in Spanish-language TV.

HBO’s Los Espookys is gaining critical attention for its unique tone and style. But, it is one of the most groundbreaking shows on television for a reason that has nothing to do with its sense of humor.

While streaming services like Netflix and Amazon have been stocking up on Spanish-language content, much of it has not been marketed to American audiences. Netflix has massive output across the Spanish-speaking world and almost none of it makes a dent in American culture. Spanish-language shows are often adapted into American reboots, as is the case with Queen of the South, Jane the Virgin, and Ugly Betty, but you have to hunt for the source material. From time to time, you might see ads for a Spanish-language show in Latinx neighborhoods, but you don’t see billboards for telenovelas in gentrified areas of New York, Los Angeles, or Chicago.

Los Espookys changed that when it received a marketing push similar to other American niche comedies like What We Do in the Shadows, Barry, or Broad City.

If you look at Los Espookys as groundbreaking, then you have to look at how other shows have pushed toward this moment. Though much of Netflix’s Narcos is in English, the choice to have Spanish-speaking characters speak Spanish dialogue was made, and it’s increased the amount of Spanish as the series progresses. The Washington Post wrote about this, calling it “tricking American audiences into embracing subtitles.”

The CW’s Jane the Virgin also features Spanish-speaking characters. From the beginning of the series, showrunner Jennie Snyder Urman made the decision to have Jane’s (Gina Rodriguez) Venezuela-born grandmother Alba (Ivone Coll) address the family in Spanish even though they spoke to her in English. Before that, Dora the Explorer taught an entire generation to watch bilingual television.

Film has also led us to this moment. Three of the most famous directors in the world are Mexican and lately, they have taken turns winning Academy Awards. But, it wasn’t until last year’s Roma from Alfonso Cuarón that one of these directors had an awards season push for a Spanish-language film outside of the best foreign film category. Y tu Mama Tambien from Cuarón and Alejandro Iñárritu’s Babel, Amores Perros, and 21 Grams are at least partially in Spanish. Guillermo del Toro works in Spanish less often (likely due to the cost of financing genre films), but 2001’s The Devil’s Backbone and some of his earlier works were in Spanish.

Consciously or not, studios and networks have been prepping their English-speaking audiences for Spanish-language content. The question is when we will see major television releases in Spanish that demand larger budgets and larger audiences than Los Espookys. Though critics like the show, it is similar to a lot of what Armisen has done in his post-SNL career: a niche product for a niche crowd, just like Documentary Now and Portlandia.

The only other Spanish-language TV show to break through to mass American audiences recently has been the Netflix reality show Made in Mexico. The series takes the familiar American reality TV premise of following a group of wealthy sexy young people around a big city and tries it in Mexico. The New York Times, the Ringer, the L.A. Times, Forbes, Deadline, and more have covered the show (though often the coverage focuses on the controversy around the series). The budget levels and viewership requirements of reality just aren’t the same as an ambitious narrative show.

Streaming services are ramping up their Spanish-language content, but a mainstream, all-Spanish hit hasn’t quite landed.

When Netflix released Tijuana earlier this year, it seemed like this might be the show to do it. The series, which follows journalists working in the coastal Mexican city dogged by political corruption and organized crime, felt very much of the moment. It also looked like a show Americans could get behind. Thanks to American co-financing from Fusion Media Group, Tijuana had a larger budget than a lot of Mexico-produced television and it felt more like an American prestige drama than a telenovela. The Daily Dot gave it a glowing review, comparing it favorably to The Wire.

But, the show was barely advertised stateside. There were no billboards, no social media pushes for U.S. audiences and very little coverage from U.S. critics. The same is true of Spain’s Money Heist, which Netflix acquired in 2018. The Spanish action series is a hit abroad and routinely makes lists of the best foreign shows on Netflix. Yet, it hasn’t made headway here. The show warranted no more than a minor mention in the New York Times and was generally only covered by sites that pride themselves on being digital completists or cover foreign material.

So, when will we see the great Spanish-language TV breakthrough? It is hard to say exactly, but it the moment has to be imminent.

Netflix has announced it will produce 50 new projects in Mexico. With this investment will come the construction of a Netflix office in Mexico City for coordinating production and development in Latin America. While some of these will be intended only for a Mexican or broader Latinx audience, surely some of these projects have a chance of breaking through to the English-speaking world.

Amazon hasn’t been as ambitious with Mexican production, but it has steadily produced content for Mexican audiences. Hulu, meanwhile, has been more interested in purchasing back catalog content from Spanish-language giant Telemundo. Apple Plus has not yet announced any Spanish-language content.

While Netflix looks to be the leader in this emerging space, Disney Plus will also likely play a role upon launch, though ScreenRant reports that Disney has some significant barriers to launching internationally, including reacquiring foreign distribution rights to some of its back catalog and dealing with international content quotas. Many countries have “content quotas” that require a percentage of a service’s content to be produced in that country. In the short term, this could hold Disney back, but in the long term, this means that Disney will have to churn out more Spanish-language television and film. Expect the arms race between Netflix and Disney Plus to at least be partially in Spanish, with subtitles.

If we had to guess where the first great Spanish-language TV hit to take America by storm is going to come from, the safe money is on Netflix. But, just as Los Espookys surprised, perhaps a Mexican Emmy-winning drama is just around the corner.