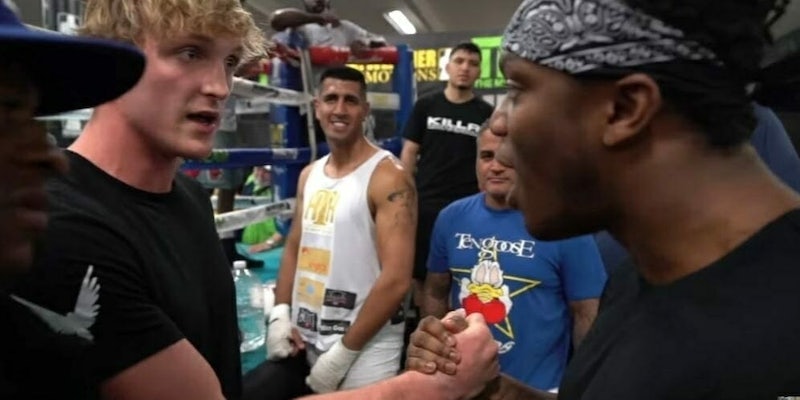 In a YouTube response video to his younger brother on Monday, KSI blasted Deji for his family “betrayal.” Though KSI said during his 80-minute vlog that he believed these types of videos shouldn’t be monetized, he placed ads on the content so he could donate the revenue to multiple suicide prevention charities.

But Logan Paul—KSI’s boxing rival—claimed all the ad revenue stemming from the video.

That led to massive internet outrage, particularly since Paul tarnished his career at the beginning of 2018 when he posted video of a suicide victim in Japan.

If when watching KSI’s video on Monday, you didn’t actually see any advertising, he quickly made it apparent why.

If you don't see ads, it's because it's being claimed by Logan Paul's network pic.twitter.com/AG6baQKsLG

KSI wrote, “If you don’t see ads, it’s because it’s being claimed by Logan Paul’s network.”

It seems like it was an automatic claim by Paul’s team because KSI used clips of Paul’s podcast interview with Deji from last December. That means Paul didn’t physically claim the video himself. He might not have even known KSI had uploaded a video with Paul’s footage. None of this normally would have been a big deal, especially if the controversial YouTuber would have quietly released the copyright claim, sending the money back to KSI and to the charities he had chosen.

That Paul tweet has since been deleted. But Paul got blasted for his callous response.

It would be Logan preventing suicide awareness pic.twitter.com/ohrVTxEEkJ

Was it automatically claimed; yes.
Did Logan then see the claim with his own eyes: yes.
Could he have sorted out the claim then by retracting it; yes.
Instead did he message JJ cussing him out; yes.
Does that invalidate everything you said? Yes.

Logan Paul, once again, proving himself to be an unscrupulous shitweasel.

Eventually, Paul removed the claim, but not before throwing another insult at KSI.

really jumped the gun on that one… I’ll make sure the automatic claim is removed. KSI still a pussy tho

And not before he insulted a random observer.

take a second before you suck my ass https://t.co/wtlPvmrdUP

So much of the YouTube community has been disgusted with the ability of third parties to use the platform’s copyright system to claim videos for their own (and take all the ad revenue) if there’s a snippet of video or a tiny bit of music that doesn’t necessarily belong to the YouTuber who posted the video.

Now, Paul is part of that problem.

After his video from the Japanese suicide forest threatened his career, Paul pledged to donate $1 million to suicide prevention groups. He seemed sincere in his sorrow at the time. He probably was. But he undercut himself in trying to insult KSI on Monday and he made it clear that sometimes Paul is nearly impossible to admire.

The National Suicide Prevention Lifeline is 1-800-273-8255. Other international suicide helplines can be found at befrienders.org. You can also text TALK to 741741 for 24/7, anonymous, free counseling from the Crisis Text Line.