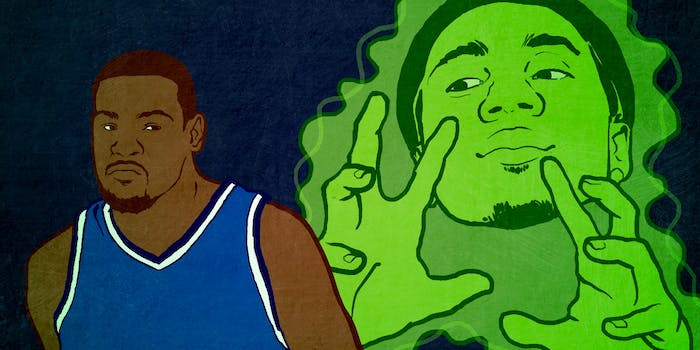 The Based God is never wrong.

The Golden State Warriors and the Cleveland Cavaliers will meet once again with the title on the line after the Warriors defeated the Oklahoma City Thunder in Game 7 of the Western Conference Finals Monday—and one rapper is claiming credit.

Lil B, who’s known for his Twitter-driven curses on other big stars—particularly basketball players—from his “Based God” moniker, directed a victory tweet toward any doubters of his power following the final whistle.

And they said the curse was not real " The BasedGod" has never lied to me and like he told us.. The Warriors are going to the finals – Lil B

Whether the Warriors’ win was a major comeback or something else entirely (if you believe the conspiracy theories) is irrelevant, because Lil B’s curse on the Thunder’s Kevin Durant apparently had the last word.

Their off-and-on feud, complete with cursing, is the stuff of Twitter legend. But here the Thunder were dominant early on—some Based God magic was required.

Just got word from " The BasedGod " that the thunder will not be beating the Warriors in the playoffs series,Durant is still cursed – Lil B

B (born Brandon McCartney) was a careful observer of the Thunder-Warriors series, and even when the Thunder emerged with a commanding 3-1 lead he didn’t pivot. Lil B even praised Durant for trying to break the curse.

But Lil B never doubted the inevitability of Golden State.

Respect to everyone who believed in " The BasedGod " he said the Warriors would win the series,down 3-1 " The BasedGod" does not lie – Lil B

And so Durant is without an NBA championship despite nine hyped years as the league’s next dominant superstar, and everyone is once again celebrating the power of Lil B.

.@LILBTHEBASEDGOD tried to warn everyone…

.@LILBTHEBASEDGOD commented on Thunder's loss to Warriors in Game 7. pic.twitter.com/WlZncr6Wvy

While most of the other NBA teams are done this year, they might already be trying to get on His good side for next season.

we got you, Lil B pic.twitter.com/YrPnmsPA5y

No word yet on which narrative the Based God prefers in the NBA Finals: a repeat to end a near-perfect season for Steph Curry, or redemption for LeBron James.