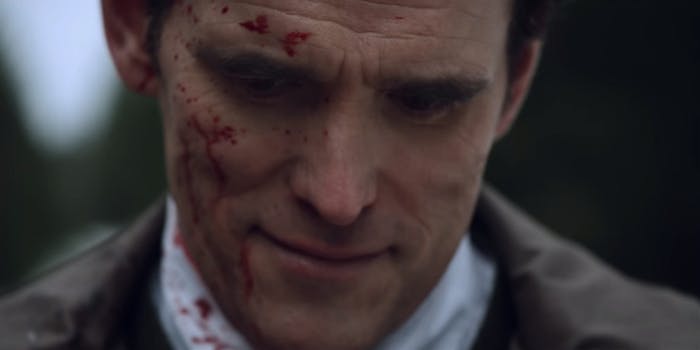 After a 7-year ban for making a Nazi joke, the director was welcomed back.

Lars Von Trier is back on his bullshit. After a seven-year ban from Cannes Film Festival, for making an alleged joke about sympathizing with Hitler, the director was allowed to return with The House That Jack Built, which reportedly prompted a wave of walkouts.

The film stars Matt Dillon as an architect who also tortures and murders women. According to IMDb, “the story follows Jack, a highly intelligent serial killer, over the course of 12 years and depicts the murders that truly develop Jack as a serial killer.” Uma Thurman and Riley Keough also star; the former is listed as “Lady 1” on IMDb and the latter as “Simple.”

According to the Hollywood Reporter‘s review, women and children are murdered in the film, but it’s suggested that Von Trier is possibly also making a statement: “It seems a direct FU to the current climate of reckoning over gender bias and sexual misconduct when the unrepentant Jack bemoans the misfortune of being born male and therefore guilty, asking: ‘Why is it always the men’s fault?’ He even goes as far as saying women make more cooperative victims: ‘Easier to work with.'”

According to Variety, the walkouts started after a scene in which Dillon kills two children with a shotgun. But the film also apparently got a standing ovation.

This is how quickly the audience clearly out after Lars von Trier’s ‘The House That Jack Built.’ #Cannes2018 pic.twitter.com/yxZJJww71w

Von Trier’s films often focus on the psychological torture and suffering of women and are often controversial. However, last fall nine women alleged misconduct, harassment, and bullying as employees of Zentropa, his production company. Singer Björk, who starred in 2000’s Dancer in the Dark, alleged sexual harassment by a Danish director on a film set, but did not name Von Trier. He denied the allegations.

There are of course rebuttals of “Well, what did you expect?” to the walkouts and outrage over the film, but that’s a cop-out; its misogyny and violence are going to have a more difficult time getting analyzed as “art” now. As Playlist’s Jessica Kiang says in her review: “In the past, Von Trier has been defensible on the grounds of his undeniable filmmaking talent and because so much of his nihilism clearly sprang from a place of intense personal pain and depression. This film, however, goes so much further in its overt horribleness that it feels like the director is standing in the middle of the road over its mutilated corpse waving a bloody knife and begging the police to arrest him.”

Cannes—a festival that still requires an outdated and sexist dress code for women—apparently didn’t have too much trouble letting Von Trier back in. Artistic director Thierry Fremaux told Europe 1 in April that Cannes president Pierre Lescure was trying to remove the stigma around the director, “to make a place for him as a filmmaker again.”