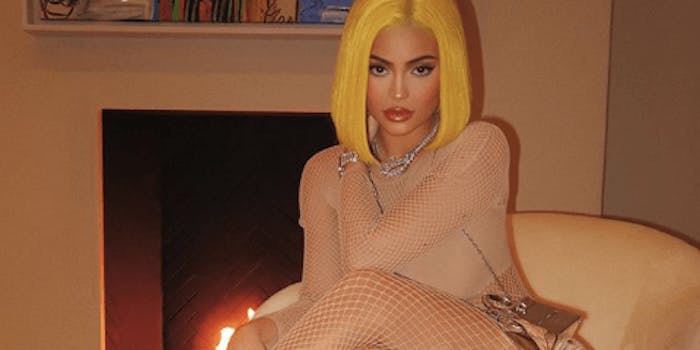 Billionaire beauty mogul Kylie Jenner deleted her latest Instagram caption after getting called out for being insensitive to those suffering from the Australian wildfires.

Jenner posted a photo blinged out in a fishnet catsuit and yellow wig in front of a fireplace Monday night. She originally captioned the photo “find ur fire 🔥💛” but quickly changed it to “night out..💛” after fans said the original caption was insensitive given the wildfires in Australia, according to the Sun.

One user commented “if anyone needs fire…you can have ours. -Australia.”

Another commented “bro pls just donate $300 billion to save the earth, it’s literally just Stormi’s allowance for a month, she won’t mind.”

Kylie is not the only Kardashian-Jenner family member to face backlash over comments about the Australian wildfires. Kim Kardashian West and Kendall Jenner both received criticism after tweeting about climate change with broken heart emojis.

have you tried giving the fire a pepsi???? it's finally ur time to shine the world needs you…. and ur pepsi

But Kardashian West set the record straight on her family’s contributions to fighting climate change. She clapped back on Twitter after someone tweeted “nothing gets me more heated than to see the Kardashians/Jenners talk about climate change/wildfires & not donate even a penny.”

“Nothing gets me more heated than to see people think they know what we donated to and to think we have to publicize everything,” Kardashian West tweeted.

nothing gets me more heated than to see people think they know what we donated to and to think we have to publicize everything https://t.co/9qW1h2eZXe

She then retweeted Khloé Kardashian who said “good deeds should be done with intention and not for attention.”

Good deeds should be done with intention and not for attention. We are all blessed to be able to bless others even if it is in the slightest way. But we do not need to be boastful about that. Be boastful in regards to teaching others how they may be able to help as well.

But Kardashian West’s tweets did little to change people’s minds about the Kardashian-Jenner’s perceived inaction. People still slammed Kylie for wearing fur slippers on her Instagram story right after saying her heart was breaking over the half a billion animals dying because of the fires.

I'M SO SICK OF THIS F*CKING FAMILY https://t.co/MWMnwEaTXn

It seems celebrities will have to do more than just tweet condolences on social media to avoid being dragged for insincerity and hypocrisy when it comes to climate change.