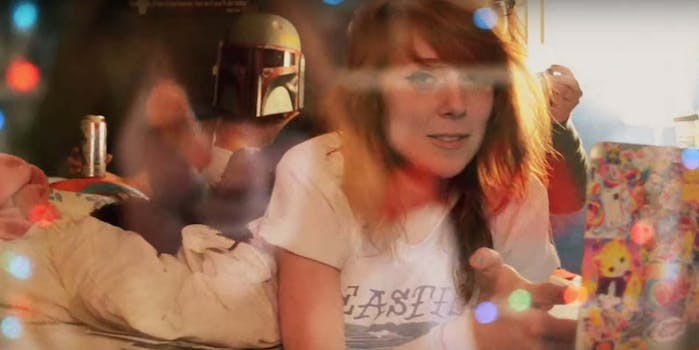 How rapper Kitty raised $39,000 on Kickstarter to finally make an album

She was about the quit music altogether.

Rapper Kitty gave serious consideration to quitting music altogether if this Kickstarter thing fell on its face. It’s a vulnerable, difficult gesture to ask the Internet to fund a creative venture—a tangible album, a boutique product—especially when the demand is a giant question mark.

“Honestly, I’m still surprised,” she said a few days after asking the Web for money. “I’ve had anxiety over the past few weeks. What if it doesn’t work? That’s such a bad look.”

But the conceptualized-in-her-head album cruised past its $25,000 funding goal: With roughly two weeks left on the campaign, more than 844 people have chipped in over $39,000.

It’s an earned benchmark for the artist, having spent the last four years releasing seven free, downloadable mixtapes and EPs. The 22-year-old Kitty, born Kathryn-Leigh Beckwith in Daytona Beach, Florida, has made Rolling Stone lists, toured and collaborated with neon icons like Riff Raff and Danny Brown, and pioneered bedroom rap that has been dismissively slapped with labels like “Tumblr-wave” and “Tumblr-core.”

But maybe the sweetest part about successfully crowdfunding an album is that she gets to write and produce the thing without input from record labels. The two don’t exactly have the best relationship.

“I don’t think labels are paying any attention to what actually matters,” Kitty said. “Artists lose them money, like a lot, trying to put things on that don’t work… Maybe it’ll make them pay more attention?”

Since making buzzworthy shockwaves in 2012 with introspective, self-aware, awesomely-morbid-in-their-gaping-awe singles like “Okay Cupid,” Kitty has been steadfast in her refusal to give in to stupid marketing stunts. She told the Daily Dot in 2013 that she declined advertising for the dating site OkCupid, and was more recently put off when a label asked her to dye her hair.

“My first song got really big and it started out with people that wanted to give me money to basically, like, exploit myself,” Kitty explained. “Very quickly I realized that I was not interested in being a fake persona… Everything I have now I have because I stayed myself the whole time.”

I tell her that, given her Tumblr presence, 30,000-plus Twitter followers, and industry reputation as a sort of media watchdog (she’s blogged for outlets like Vice), throwing a contract at her and then letting Kitty and her producer friends make something should be an obvious business decision. Not so much.

“When I’d meet with smaller labels and independent labels they have this weird idea that ‘you got this, you have 30,000 followers,'” said Kitty. “You know, like, a very skewed idea of what’s real.”

“The bigger dogs are afraid of me,” she said. “I came up with what I wanted to do and I brought it to a lot of labels and none of them wanted me. No one wanted to give me any money and no one believed in it.”

At this point, Kitty knows what this record will sound like and who she wants to bring in. She has a title for it. She isn’t ready to share details just yet, partially because she seems a little bit hesitant to talk a big game before she has the time and space to let her record speak for itself.

She promises that this album will be 100 percent devoid of label support, no matter who comes calling post-Kickstarter. That was why she got sympathetic fan money, after all. But she is also adamant about wanting to make a tangible product—even if it’s a decaying medium and a vanity power play. After four years of fleeting fame, she’s tired of measuring success in retweets and Likes.

“It happens and then it goes away,” Kitty said.

On 2012’s Haha, I’m Sorry mixtape, Kitty laughed off the notion that she was a “diabolical plot of the industry/and we didn’t think anybody would be into me.” Almost 40 stacks later, she could not have been more wrong about that last part.