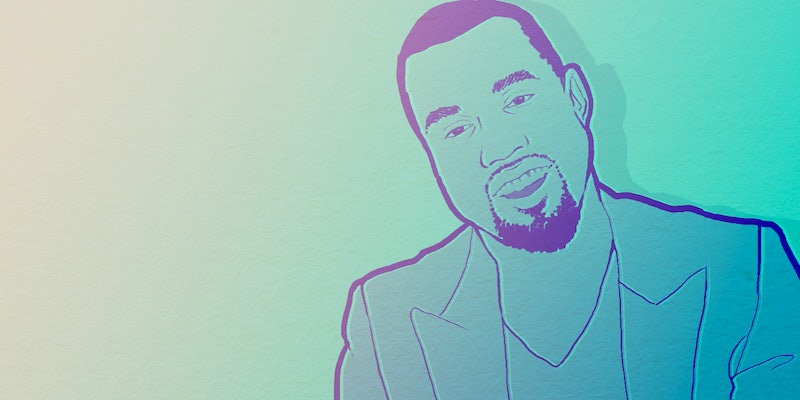 Kanye West makes another unhinged album of the future.

None of those sessions made the lean, final tracklisting for The Life of Pablo—a title announced just north of 24 hours ago, after two previous attempts that didn’t stick. And as West, sporting a red shirt and black Yeezus cap, stood before his sold-out Madison Square Garden audience Thursday in New York, he once again switched gears: “Hold up, [rapper Young Thug] wants to play some new shit.”

Thankfully, in the 40-plus minutes prior, the public had finally listened to the damn thing.

At least, some had: Swarms of music fans tragically registered for a Tidal free trial just to watch the music streaming service’s feed buffer and struggle. But in movie theaters the world over, a higher-quality simulcast came through loud and clear. And in Austin, Texas’s Arbor Theater, a Fathom Events representative told the Daily Dot that “about 200” West fans paid $25 each for a seat.

Indeed, the scene was a cozy screening littered with college students of all shades, working in a listening session during business hours.

Fathom events rep says about 200 people in Austin's Arbor Theater are filed in for #YeezySeason3 pic.twitter.com/vNmAcYCnDd

Despite the global choreography, the MSG show itself consisted of West—surrounded by cohort artists like Pusha T—walking his laptop to the soundboard and asking for the aux cord. (The event was billed as a combination album premiere and fashion line debut; stoic models stood still onstage as The Life of Pablo’s tracks played through.)

And as he’s done since 2004, the 38-year-old grumpy dad prone to Twitter word vomit played the most competitive and pace-setting hip-hop in the genre. Even if that meant taking a backseat on his own stuff.

Like 2013’s Yeezus, Pablo runs on outsourced catharsis almost more than West’s voice. The Weeknd-assisted “FML”—searingly delivered over industrial clanks and culminating with a pyschedelic entryway that piped in Auto-Tune—gets to its domestic horror story mostly on production and guest vocals.

The first performance to inspire cheers and gasps in the Arbor was from Chicago newcomer Chance the Rapper, who eviscerated a double-timed verse on album-opening “Ultra Light Beams.” Kelly Price and The-Dream help flesh that one out, and it’s what West meant when he claimed to be working on gospel music—church choir melodrama, children, spoken word. It’s such a genius glob of compressed ideas that West rapping about prayers for Paris (presumably following the terrorist attacks of Nov. 13) barely registers.

The vibes move along, and soon West raps in road warning signs with blaring observations like “I just fucked a model, and she just bleached her asshole.” But again, the game’s all-time best rap editor folds in Kanye-pioneered drum loops, soul samples, and wholesome optimism.

West is a hometown hero, and he uses that influence to pen on-demand streaming anthems about the self, call himself the “ghetto Oprah,” and make “hands up, we just doing what the cops taught us” into calculated phrases of empowerment. And then a few tracks later—after giving dap to Rihanna and Swizz Beatz and joking about hooking up with Taylor Swift—an impervious-to-criticism thought about putting a GoPro camera on his dick.

“Did I deliver on my promise of the album?” West asked upon completion. To paraphrase a scrapped single from the record: all day.

Correction 10:40pm CT: An earlier version of this article referenced a collaboration with rapper Future; while Wikipedia still cites that name as correct as of this writing, other sources indicate the track showcased Desiigner instead.

Update 3:23am CT, Feb. 14: Following his performance on Saturday Night Live, West’s album finally hit an official release via his website and Tidal Sunday morning. The final version is a longer 18 tracks strewn across 58 minutes.