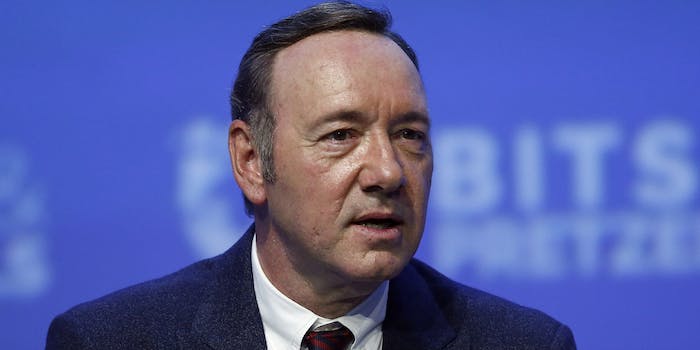 Man claims Kevin Spacey attempted to rape him at age 14

'He is a pedophile.'

Since Kevin Spacey responded to Anthony Rapp’s accusation that he assaulted him at age 14, even more allegations of misconduct have surfaced about the House of Cards star.

Today Vulture published one man’s anonymous account of a sexual relationship with Spacey that started when he was 14 and Spacey was 24. He claims the relationship began as consensual—as consensual as a relationship between a minor and an adult can be—and there was “physical activity” but not intercourse. He recounted going to his apartment to hang out one night and Spacey allegedly forcing himself on him: “I always have said, ‘He tried to rape me.’ I told him I didn’t want that, he went again to do it, I told him no, he went again and pushed harder and grabbed me and pushed harder. I don’t know how I would see that as anything besides an attempted rape, which I was able to thwart.”

The man, who is now 48 and living on the East Coast, says he wanted to speak out because of Spacey’s “repulsive” statement after the Rapp accusation, in which he came out as gay. He also says he knows predators “repeat offend.”

He is a pedophile. When you look at his statement, you realize also he’s profoundly narcissistic. He thinks this is about being caught that he’s gay. And then he is spinning it, right? ‘Oh, people like gays now. So I’ll throw them that. I’ll say I’m gay and I will betray my whole community and do something else that conflates pedophilia with male homosexuality.’

Spacey has claimed, via his publicist, that he’s seeking treatment and evaluation, though it’s not clear for what. Production has halted on the final season of House of Cards, and his online MasterClass acting course, the butt of many a Difficult People joke, has been pulled.