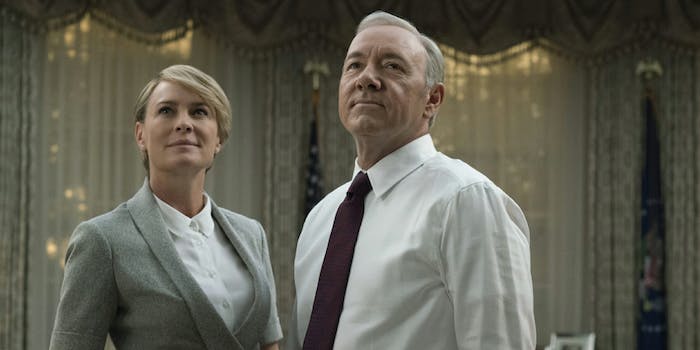 The future of the show and its lead actor is up in the air.

Netflix has announced it is postponing production for season 6 of House of Cards indefinitely, in light of recent sexual abuse allegations made against Kevin Spacey. The joint production has been halted while Media Rights Capital and Netflix “review the current situation and address any concerns of cast and crew,” according to a statement released Tuesday.

The cast and crew are currently in Baltimore, where they had been filming up until this announcement was made.

Production on the final season of House of Cards is suspended until further notice.

This will give us time to review the current situation with our producing partners at MRC.

Execs are on set this week discussing with our cast and crew. More details to come.

This decision comes in the wake of an interview published by BuzzFeed on Sunday where Star Trek: Discovery actor Anthony Rapp alleged that Spacey made an unwanted sexual advance on Rapp in 1986, when he was just 14 years old.

After the allegations blew up online, Netflix announced on Monday that season 6 would be the final season of House of Cards before ultimately postponing production.

Neither company has commented on the future of season 6, which is scheduled to be released mid-2018, or whether Spacey will be cut from the show. In the meantime, Variety reported that the network is looking into multiple spin-offs of the show.