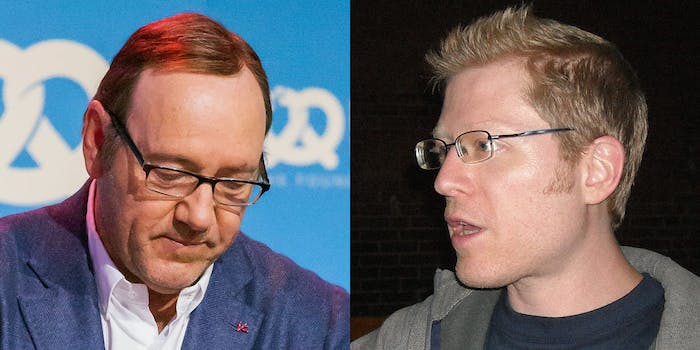 The incident allegedly took place in 1986.

Actor Anthony Rapp has come forward with allegations that Kevin Spacey made a sexual advance on him when he was 14 years old.

In an extensive interview with BuzzFeed News, Rapp, who’s now 46, alleges that it took place in 1986 while he and Spacey were both performing on Broadway (Rapp in Precious Sons, Spacey in Long Day’s Journey Into Night) when Rapp was 14 and Spacey was 26. They met at a post-show party that Broadway actors often attended. During another party, Spacey invited Rapp and a friend who visited him from Joliet, Illinois to a nightclub, and despite being underage, both boys got into the club.

Spacey later invited Rapp to a party at his apartment, where Rapp was the only person in attendance who wasn’t an adult. Rapp says that as a child actor he’d often been the only non-adult in the room so the situation didn’t raise any red flags. Soon, Rapp realized that he and Spacey were the only two people left in the apartment.

“My memory was that I thought, Oh, everybody’s gone. Well, yeah, I should probably go home,” Rapp said. Spacey, he recalled, “sort of stood in the doorway, kind of swaying. My impression when he came in the room was that he was drunk.” Rapp doesn’t remember Spacey saying anything to him. Instead, Rapp said, “He picked me up like a groom picks up the bride over the threshold. But I don’t, like, squirm away initially, because I’m like, ‘What’s going on?’ And then he lays down on top of me.”

“He was trying to seduce me,” Rapp said. “I don’t know if I would have used that language. But I was aware that he was trying to get with me sexually.”

Rapp says he was able to “squirm” away and leave Spacey’s apartment, and for some time it was easy enough for Rapp to try and forget that his encounter with Spacey ever happened because Spacey was just another theater actor. A few years later, Spacey’s fame began to grow and it became impossible for Rapp to ignore him.

Rapp has been telling friends and loved ones what had happened as early as 1990, which multiple people confirmed with BuzzFeed News. He detailed the incident in a 2001 Q&A with the Advocate, which redacted Spacey’s name; the Advocate confirmed to BuzzFeed News that Rapp was discussing Spacey. Rapp says he was inspired to come forward with his story after seeing dozens of women speak publicly about Harvey Weinstein. (In some circles of Hollywood, Spacey’s alleged misconduct was considered something of an open secret, though Rapp is the first person to speak about it on the record.)

Spacey initially didn’t respond to a request for comment, but soon after BuzzFeed’s story went live he posted his response to Twitter. Spacey said he doesn’t remember the encounter Rapp recalled to BuzzFeed News, but “if I did behave then as he describes, I owe him the sincerest apology for what would have been deeply inappropriate drunken behavior.”

In the same response, Spacey, whose sexuality has been speculated on for years, publicly came out as gay.

Spacey’s statement, in which he blames his actions of allegedly making sexual advances on a 14-year-old on “inappropriate drunken behavior” and comes out of the closet, has been met with fury from members of the LGBTQ community. Those critics see Spacey tying the two together as gross manipulation and conflating homosexuality and pedophilia.

The psychology of the closet is dark and cruel and self-punishing. That Spacey has dwelt in that for years is sad. But 14 is 14. https://t.co/f152ZIE6pQ

Kevin Spacey has just invented something that has never existed before: a bad time to come out.

Nope to Kevin Spacey's statement. Nope. There's no amount of drunk or closeted that excuses or explains away assaulting a 14-year-old child.

Kevin Spacey has immense wealth & fame, and yet never came out as a gay man until he needed a distraction from this story – & sympathy. https://t.co/VEDQQ5vM5C

Media: "Kevin how do you respond?"

“There’s never truly a wrong time to come out and I’d never begrudge anyone for accepting their sexuality,” Ira Madison III wrote in the Daily Beast. “But the seediness of using your coming out to deflect from a sexual assault allegation is something else entirely.”

Rapp took to Twitter after Spacey’s response went live, and though he didn’t address those comments directly he reiterated that he came forward with his own story to “shine a light and hopefully make a difference.”

I came forward with my story, standing on the shoulders of the many courageous women and men who have been speaking out 1/3

to shine a light and hopefully make a difference, as they have done for me. 2/3

Everything I wanted to say about my experience is in that article, and I have no further comment about it at this time.