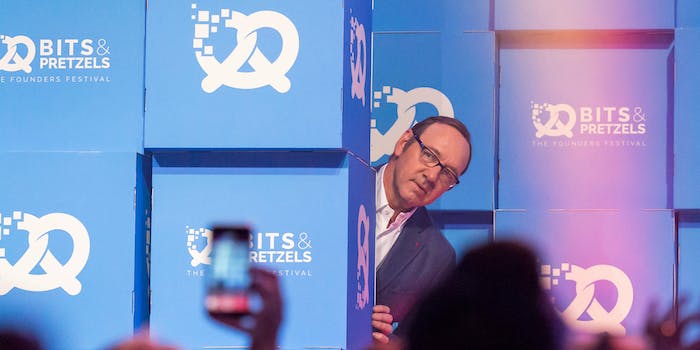 House of Cards executive producer and actor Kevin Spacey allegedly sexually assaulted actor Anthony Rapp when he was 14, according to a story BuzzFeed News broke late Sunday night. And now Spacey’s apology has left LGBTQ activists livid—especially since he used the allegations as an opportunity to come out about his sexuality.

According to BuzzFeed’s interview with Rapp, in 1986, Spacey allegedly invited the then-teen actor into his apartment for a party. After the night ended, Spacey reportedly hoisted Rapp onto his bed, rested on top of the child actor, and began “pressing into” Rapp. Rapp claims he pushed Spacey away after he began the alleged assault, soon leaving the apartment, unsure of what exactly happened to him.

“The older I get, and the more I know, I feel very fortunate that something worse didn’t happen,” Rapp said to BuzzFeed News. “And at the same time, the older I get, the more I can’t believe it. I could never imagine [that] anyone else I know would do something like that to a 14-year-old boy.”

Shortly after BuzzFeed published the exposé, Spacey turned to Twitter with an official apology, stating that he is “beyond horrified to hear [Rapp’s] story.” But many feel Spacey’s apology isn’t enough, in part because he pushes responsibility onto Rapp for “the feelings he describes” as opposed to the actions he allegedly did to a 14-year-old.

Even worse, Spacey took this moment, of all moments in the public spotlight, to come out as gay.

“This story has encouraged me to address other things about my life,” Spacey explained. “As those closest to me know, in my life I have had relationships with both men and women. I have loved and had romantic encounters with men throughout my life, and I choose now to live as a gay man. I want to deal with this honestly and openly and that starts with examining my own behavior.”

In just about any other circumstance, Spacey’s coming out would be cause for celebration. But the actor is being accused of sexually assaulting a minor. In his apology, he is conflating his “behavior” of alleged assault with his sexuality, and therefore perpetuating a horrific, ancient stereotype that gay men are predatory.

Headlines across the morning news cycle are also focusing on Spacey’s sexuality over his alleged crime, with ABC News, the Independent, and the Weekly Observer’s reporting on the actor’s coming out first and foremost. By doing so, they are treating gayness as a greater attention-grabbing spectacle than sexual assault.

For these reasons, people on Twitter are calling out Spacey and the media for trying to rewrite the narrative of sexual violence.

Nope to Kevin Spacey's statement. Nope. There's no amount of drunk or closeted that excuses or explains away assaulting a 14-year-old child.

This whole Kevin Spacey situation reminds me that queerness is still more shocking than sexual violence to far too many people.

Media: "Kevin how do you respond?"

Kevin Spacey has just invented something that has never existed before: a bad time to come out.

Kevin Spacey resorting to the "Yay I'm gay" parade only when allegations of child molestation comes out is wicked trashy.

Others pointed out that this his deflection tactic is familiar. When sexual assault allegations against Harvey Weinstein emerged, he also used his media time to attack President Donald Trump and the National Rifle Association.

Others also acknowledged that Spacey’s allegedly predatory ways are about as open a secret in Hollywood as Weinstein’s.

We’ll likely find out how true that is in days to come.