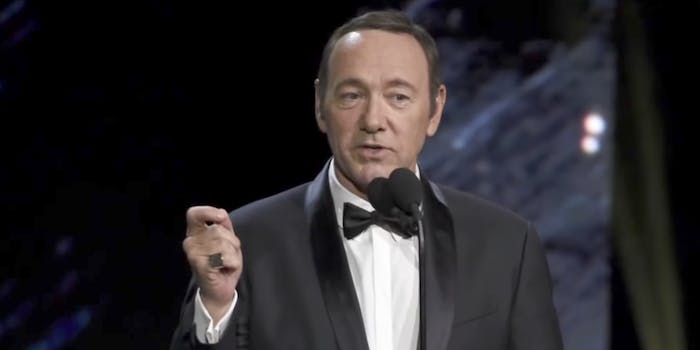 'We aim to foster a safe and supportive environment.'

The London theater where Kevin Spacey served as artistic director for more than 10 years opened a hotline on Oct. 31 of this year for all current and former staff to report sexual harassment.

Since its investigation launched, the Old Vic theater said Thursday that it had received 20 allegations against Kevin Spacey from 20 men who came into contact with the actor at the theater, Reuters reported.

The Old Vic’s hotline is staffed by external advisers, and they’re hoping it will be a resource for people to report issues they might have felt “unable to raise” for whatever reason. Spacey has been accused of sexual misconduct by two separate people so far this week, and since Spacey’s case shares a similar widely joked-about open-secret vibe to disgraced studio head Harvey Weinstein‘s, the theater is rapidly working to make every resource they can available. Spacey served as the Old Vic’s artistic director from 2004–2015.

In a statement on Oct. 31, the theater explained that the reported behavior “is completely unacceptable”—at odds with the kind of community they’re hoping to cultivate. “We aim to foster a safe and supportive environment without prejudice, harassment or bullying of any sort, at any level,” it wrote. “We want our employees to feel confident, valued and proud to be part of The Old Vic family. Any behaviour we become aware of which contravenes these goals will not be tolerated.”

This news comes just a month after Texas movie theater chain Alamo Drafthouse and Los Angeles theater Cinefamily were forced to reckon with sexual harassment allegations in their own communities. Cinefamily similarly set up a hotline.

The Old Vic told Reuters it received no response from Spacey after asking him to participate in the investigation. The theater also said it could not confirm whether the allegations were true or not.

Netflix has halted production on House of Cards amid the allegations against Spacey, announcing that the season currently being filmed will be the show’s last.