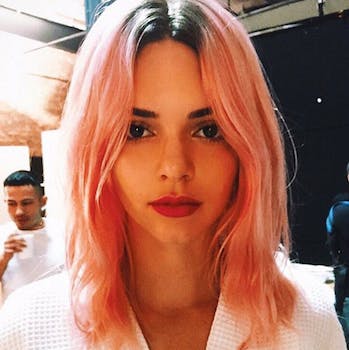 It's Wednesday, so why not?

Kendall Jenner just Instagrammed an intentional boob-flash photo because it’s Wednesday and why not? In the pic, she appears to be living her best life as she holds the strap of her tank top aside to reveal her right breast.

my favorite photo for all 40 mill of you. genuine happiness…taken by lil Ky @490tx

Instagram’s ongoing war on the nipple probably won’t come into play here, either, because Jenner covered her bases in the editing process: Her nipple appears to have been digitally altered away in addition to that big red X obscuring any controversial areas.

On Twitter, she called it her “favorite photo” of herself. She credits it to “lil Ky” in her caption, which suggests that her sister Kylie took the pic, but then she also tags actor Moises Arias’s handle @490tx at the end, so maybe it was a collaboration. Art!