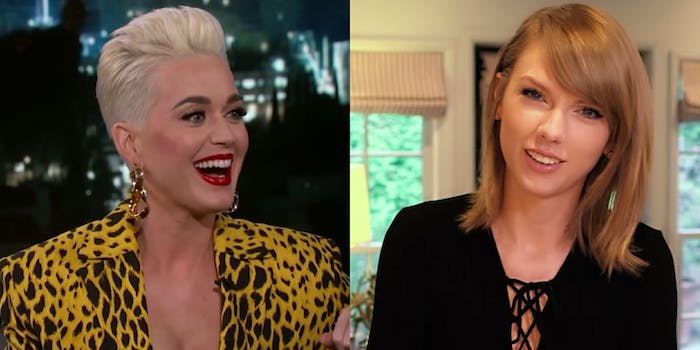 Taylor Swift and Katy Perry seem to have finally resolved the years of bad blood between them—with the help of a literal olive branch.

Swift posted a video to her Instagram Story on Tuesday showing a gift box from Perry that included the peace offering and a letter congratulating her on the opening night of her stadium tour in Glendale, Arizona.

“This means so much to me,” Swift says in the video.

The first few lines of the letter are as follows:

“Hey old friend, I have been doing some reflecting on past miscommunications and hurt feelings between us. I really want to clear the air …”

Perry also writes she’s “deeply sorry,” but the note cuts off there in the video.

Last May, Perry told talk show host James Corden that the beef between to two singers started over backup dancers’ contracts, according to the Huffington Post. Swift’s song “Bad Blood” has long been rumored to be about Swift, and Perry’s “Swish, Swish” probably alludes to the drama as well.

Fans received the news that the years-long feud has finally been resolved with shock and joy.

Me as soon as i saw 'Katy' and 'Hey old friend' pic.twitter.com/Ju6pNw0JfL

If Swift and Perry can overcome their differences, maybe there’s hope for world peace after all.

Sure, the Iran nuclear deal fell through, but Katy Perry and Taylor Swift have made up. In international diplomacy, you win some and you lose some.

If Katy Perry can stop hating Taylor Swift, every random verified blogger with less than 3,000 followers can too.

Or at least a collaboration.