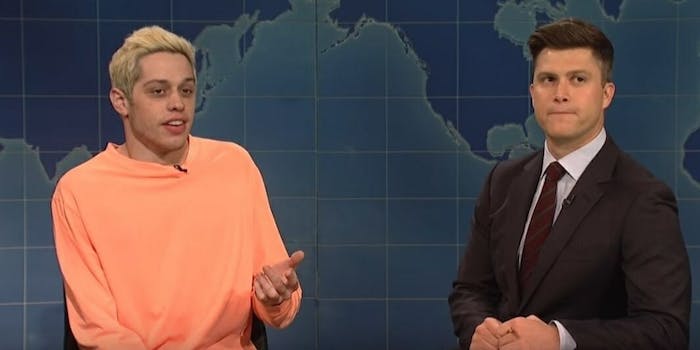 Pete Davidson on Kanye West’s ‘SNL’ rant: mental illness ‘is not an excuse to act like a jacka**’

Davidson introduced his own version of a Kanye-inspired MAGA hat.

A week after Kanye West went on a bizarre rant just when Saturday Night Live was going off the air, praising Donald Trump and ripping the show on which he’d just performed, Pete Davidson had quite a response on Weekend Update.

Davidson, who’s long riffed on his own mental issues and who made a big splash this summer thanks to his relationship with Ariana Grande, started by saying he and SNL cast member Michael Che had a debate to see who should comment on West.

“A lot of people thought Che should be the one to talk about Kanye,” Davidson said. “We discussed it. Che is Black, but I’m crazy. We both know which side of Kanye is at the wheel right now.”

He called West’s rant one of the most awkward experiences of his SNL career, and he showed footage of himself looking at his feet and leaving the stage while West spoke.

He also touched on whether any SNL employee bullied West for wearing a Make America Great Again hat all week. For the record, Davidson said it didn’t happen.

“Kanye is a genius, but, like, a musical genius,” Davidson said. “Joey Chestnut is a hot dog eating genius, but I don’t want to hear Joey Chestnut’s opinion about things that aren’t hot dog-related.”

Davidson also said there’s no shame in taking medication to help with mental issues and that “being mentally ill is not an excuse to act like a jackass.” Watch Davidson’s performance below.