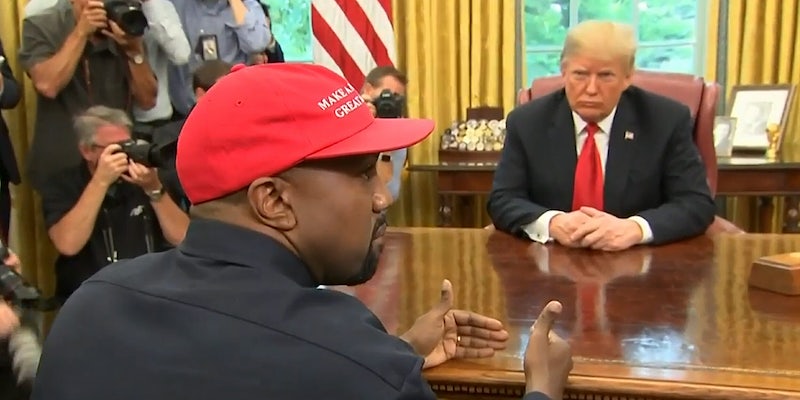 Kanye West joined President Donald Trump at the White House Thursday ostensibly to discuss prison reform, but ended up delivering a rambling monologue that touched on the 13th Amendment, his mental health, and his upbringing.

Upon entering the Oval Office, West ran up to the president to hug him, later saying, “I love this man right here!”

West compared his red “Make America Great Again” cap to “a Superman cape,” saying the hat empowered him to do good.

What Kanye sees when he puts on a MAGA hat: Superman
What the rest of us see: pic.twitter.com/tHarllJU6C

Kanye: “The MAGA hat makes me feel like Superman!”

2018 is WILD!! Wearing the maga hat makes Kanye feel like superman because of the lack of male power he’s had in his life… https://t.co/VBYdD6GliU

Regarding the 13th Amendment, which West has been criticized for saying should be abolished, he said, “Why would you keep something around that’s a trap door? If you’re building a floor, the Constitution is the base of our industry, of our country, of our company. Would you build a trap door that if you mess up and accidentally something happens, you fall and you end up next to the Unabomber? You got to remove all that trap door out of the relationship.” It is completely unclear what West meant by this.

After West finished speaking, Trump called him a “smart cookie” and said that West could speak for him any time. Trump also suggested that West run for president.