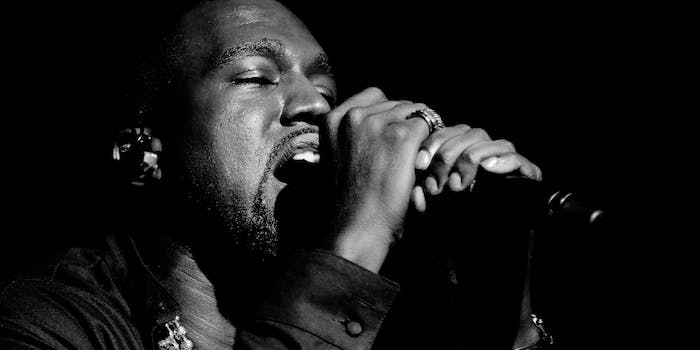 Kanye West comfortably nestled into his chair and spoke openly about his new music, working with Paul McCartney, crashing the Grammy stage in protest of Beck, and all things fashion in a remarkable 43-minute interview on Feb. 26.

Twenty-six minutes into the conversation with BBC Radio’s Zane Lowe, West broke down in tears describing the last encounter he had with fashion professor Louise Wilson. She passed away at age 52 in May, and West had just seen her at what he calls his favorite restaurant in London, Hakkasan.

Shortly after the interview, West took to Twitter and issued public apologies to artists he’s publicly discredited (however indirectly).

I would like to publicly apologize to Beck, I’m sorry Beck.

I also want to publicly apologize to Bruno Mars, I used to hate on him but I really respect what he does as an artist.

I also would love for Bruno to sing this hook on this song 88 Keys / Puff and I produced… I even asked Tyler to shoot the vid.

The interview is worth its weight in gold because it’s an open window into the creative process of the most daring, interesting, and innovative artists of the last 11 years.

In this BBC Radio interview, West is transparent about his day-to-day hypocrisy, his reverence for other artists, the difficulty of bottling up his raw emotions when speaking to reporters, and his perpetual disdain for societal labels like “exclusivity.” He comes back to one concept several times—the notion of “the two lunch tables working together. You know, humanity period man. We’re one people.”

It’s a philosophy West extends to the fashion world, a world that he acknowledges seems like a superficial endeavor that exists solely for him to brand and package $5,000 jackets that no one can afford.

But West sees the process as a constant struggle for less conventional, socioeconomically underprivileged kids to storm the industry. He sees himself as creating liberating fashion for the heteronormative ‘hood. He even apologizes at one point for the price point on the first wave of his new Adidas apparel, saying he’s working to lower it for the H&M and Foot Locker consumer.

On the music front, West unofficially confirms rumors that he’ll soon tour with Rihanna. He also highlights and outlines lukewarm new singles “FourFiveSeconds” and “Only One” so well that you instantly queue them up and enjoy them. He also says he’s recorded “song after song after song” with Paul McCartney.