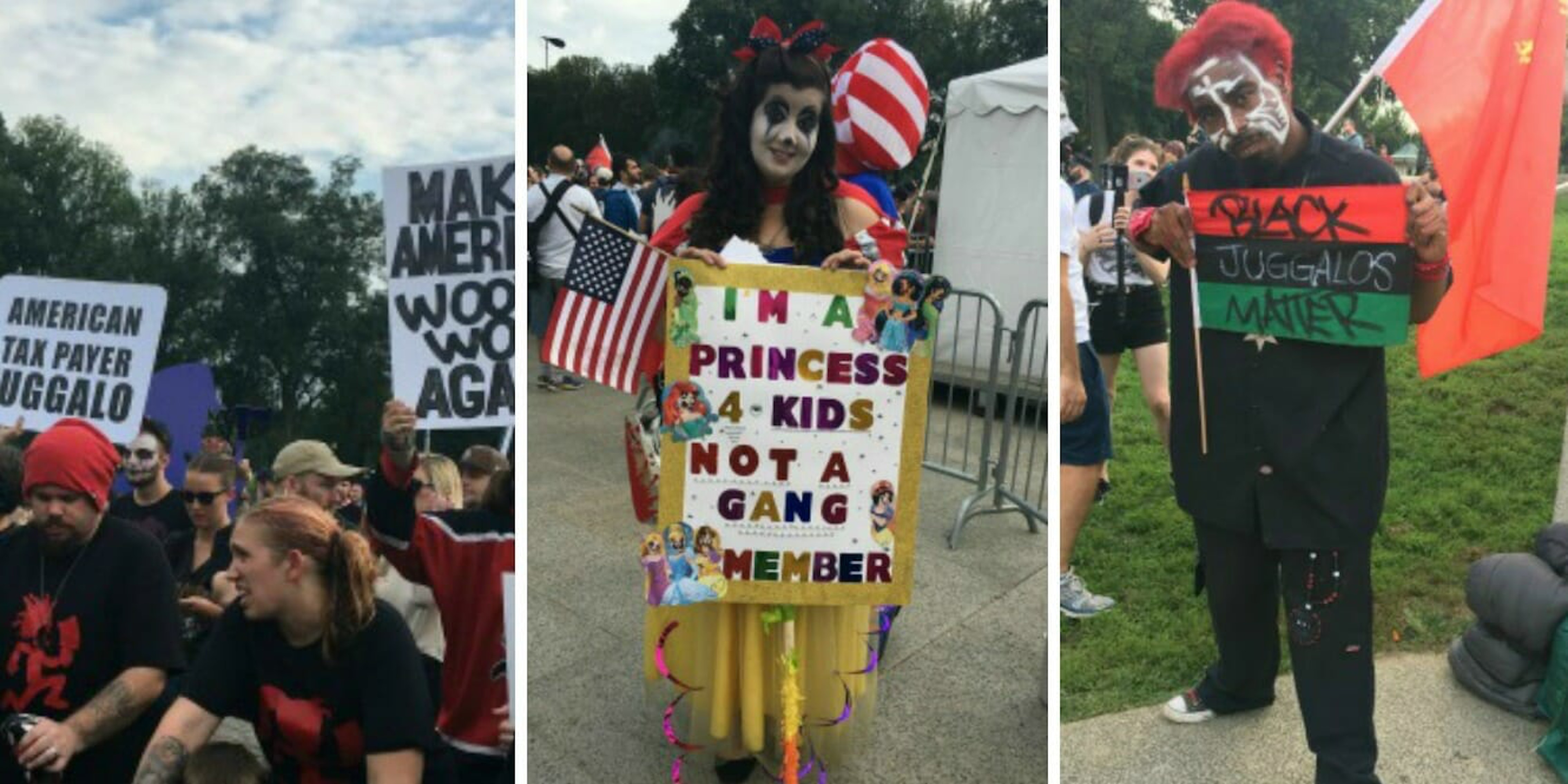 The Juggalos march in Washington showed passion and composure

Labeled a gang by the FBI, the Juggalos displayed a sense of community, dressed up in clown paint.

Taunting the FBI and spraying each other with Faygo soda, the Juggalos seemed more at home in the nation’s capital than the president’s own supporters, who were holding their own gathering nearly a mile away.

Juggalos, the devoted fanbase of the white horrorcore rap duo Insane Clown Posse, held their nascent march on Washington, D.C. on Saturday in protest of the FBI’s categorization of them as a gang. Detroit duo Violent J and Shaggy 2 Dope of ICP along with the ACLU sued the FBI in 2014 and demanded their fans be removed from the list but are still waiting on a court date.

The Juggalo’s first march on Washington was planned last summer, long before Donald Trump became president and a litany of groups began organizing rallies and protests on the National Mall. Still, the president was the elephant in the room. Speakers railed against the rising tide of hatred and intolerance. Juggalos carried signs that said “Faygo, not Facism!” and “Black Juggalos Matter” and “Fuck Nazis”.

“America’s come farther than I think they realized. A lot of people don’t want discrimination in this country anymore, man. They don’t want bullshit racism. They don’t want hate. That’s played out and ancient, man. And I feel like today we’re representing a lot of that bullshit. We’re representing the force against it,” said ICP’s Violent J to a crowd of exuberant Juggalos, anti-facists, and onlookers at the Lincoln Memorial.

Juggalos of all ages and races, hailing from as far as California and the Deep South to nearby Pennsylvania and Virginia, congregated on the Lincoln Memorial for a rally and march. The march’s opening rally included testimonies from Juggalos who have been fired from jobs, endured harassment, and even lost custody of their children due to the gang label.

Jeff Fekken, a 33-year old Juggalo from Virginia Beach, told the Daily Dot he had been a fan of ICP for 20 years. Fekken said he has never experienced any problems in his personal life from being a Juggalo but was at the march to show support for his fellow Juggalos who had suffered.

“We’re here to show everybody here that this is not any gang shit,” Fekken said. “This is a family that loves music. We love scary clowns and music—who cares? Get over it. Ask anyone here that’s not a Juggalo that’s ran into us. They love us. They love us. We’re just people. We’re humans.”

The Juggalos held  their march in Washington despite the FBI’s gang classification and even though the label has kept them out of venues in the past.

Fekken insisted that holding a Juggalo event in D.C. did not change the tone and atmosphere of the gathering.

Fekken pointed out the scores of law enforcement at the event, including the National Guard and SWAT teams.

“They need to take that shit down the street,” Feken said, referring to the Trump’s supporter rally held several blocks away on the lawn of the National Mall. “You ain’t got to worry about us. We got ourselves. We’ve got each other’s back. We don’t need security, we don’t need cops or nothing.”

That same day, organizers of a pro-Trump rally deemed the “Mother of All Rallies”, or MOAR, hoped to draw 1 million Trump supporters to the National Mall.

Fears that the Juggalos and Nazis would clash in some sort of apocalyptic death match in Washington as the two groups held concurrent rallies were unfounded. Only 1,000 participants actually showed up to the MOAR, according to on-the-ground estimates from journalists.

Prior to the march, a post on 4chan recruited troublemakers to dress up like Juggalos and start a clash during the March. But the demented prank never came into fruition. Struggalo Circus, a coalition of more politically-minded Juggalos who align themselves with the far left, called attention to the plan on Twitter.

Just to be clear, the only people we've seen saying they wanted to dress up like Juggalos and start shit were Pepe loving 4channers pic.twitter.com/ClCYa9GCy8

As for the Juggalos, they were warned to be on their best behavior.

“Don’t give them what they want,” warned Juggalo lawyer Farris F. Haddad in the group’s official infomercial for the march. ICP asked fans not to be drunk or belligerent, or to vandalize any property.

Due to the National Parks Service assigning separate march routes and rally locations, the Juggalos and the pro-Trump wing didn’t come into contact. White nationalists, for the most part, stayed away from MOAR, and so did the legions of counter-protesters they would have attracted. Antifa groups showed up to the Juggalo March not to stir up trouble, but to show solidarity.

A small mosh pit broke out at the rally but only lasted for five minutes. Some onlookers may have been sprayed with Faygo soda. And that was the Juggalo march at its rowdiest.

The Juggalos have always been apolitical, but in today’s political environment that appears not to be an option any more. Their hatred of capitalism and their self-categorization as misfits and the downtrodden resonate with both the far-left and the “alt-right,” a loose collection of right-wing organizations that harbor white supremacists. As largely working-class white people who believe their lives have been forgotten by capitalism, Juggalos share a common background with many Trump supporters. Both are likely deeply suspicious of the FBI and the establishment in Washington. But that’s where the similarities end.

Ultimately, the Juggalos are embraced by the far left and the “antifa” due to their hatred of oppression and bigotry. ICP’s Violent J called out police shootings, hate crimes against Islamic centers, and more in an opinion piece for Time. ICP rejects bigotry and racism in its music; the duo released a song called “Fuck Your Rebel Flag” in 1994 in which a line encourages fans to defecate on Confederate flags. ICP also has been known to burn Confederate flags on stage. Meanwhile, 70 percent of Trump supporters polled in South Carolina say the Confederate flag should still be flown over the state capitol.

Juggalos have a strained relationship with the police, while Trump supporters believe in law and order.

Alicia Modglin, a Juggalo and mother of two from southwest Missouri, was at the march with her children, boyfriend, and boyfriend’s family.

“I feel like an oddball. An odd one out. Not many people down South listen to ICP; a select few do. Other than that, they’ve got their opinions, I’ve got mine,” said Modglin of her experience of being an ICP fan.

Modglin, pictured with her family below, seemed at ease at the march with her two children in a stroller, among her fellow Juggalos.

“Mostly I was worried about the kids. I didn’t know how long they’d be able to sit. But they’ve been OK,” said Modglin.

Nelly, from Charlotte, North Carolina, who was at the march with her husband and two children, said she has friends who lost custody of their children due to their love of ICP and has been pulled over by police because of stickers she’s had on the back window of her car.

“It’s a ridiculous thing that we have to go through, all for the music that we should be free to listen to,” Nelly, who didn’t want to give her last name, said in an interview with the Daily Dot.

Nelly’s daughter Laura, still in grade school, held a doll with a clown face painted on it.

“Juggalos should be treated better. Don’t judge a book by its cover,” said Laura, who is pictured below with Nelly.

When asked if she told her friends at school about her love of Juggalos, the elementary schooler’s voice grew serious. “I’m too scared,” she admitted.

Her mother then explained. “Her cousins got taken away. (…Custody) rights got stripped from their father. So she’s scared to go to school and talk about it” said Nelly.

Non-white Juggalo supporters have the added burden of being a minority as well as a gang member in the eyes of the FBI.

“Especially being a person of color, you’ve already got a big target on your back from the powers that be. And you know I got to be worried about being black and being a Juggalo. And that’s something that just shouldn’t happen. All because of the music I listen to. It’s not fair,” said Rich, a Juggalo from Oakland, California who was at the rally.

Alexander Perkins, also known as “Less Legs” from Oxford, Pennsylvania, said he came to the march to fight for his rights to listen to any type of music he wants and not be discriminated against in his private life. The 32-year old said he had been a Juggalo since he was 15 years old.

“Being an African-American Juggalo, it’s kind of weird with it being white hip-hop and all. But everybody here has welcomed me with open arms, has been lovely to me and treated me with respect. It’s better than any other community that I’ve been a part of,” he said.

Perkins, who is in a wheelchair, said he hasn’t had trouble accessing Juggalo shows in the past.

“Usually when I go to shows they lift my wheelchair up and I crowdsurf until I reach the stage,” said Perkins.

That’s how the entire day went for the Juggalos, who invaded Washington with a sense of community dressed up in clown paint.