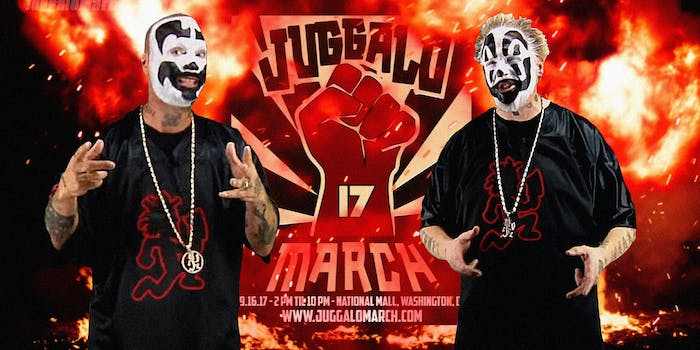 'Juggalos are the last real subculture left in America, if you ask me. We’re used to being the underdog.'

In the 1997 song “What Is a Juggalo?” Violent J and Shaggy 2 Dope explain the many attributes of the Juggalo. They get specific, sketching what drives and shapes a Juggalo. But then the chorus zooms out:

If there’s a central belief for Juggalos, the devoted fan community of Detroit rap duo Insane Clown Posse, it’s that if you’re down to clown, you’re down for life. Juggalos are family, and they’ve got one another’s back. In 2017 Juggalos still wear clown paint, but the community and ICP now have a cause to address—one centered on that very identity.

What a Juggalo is has evolved over the years, especially as the internet has shaped the fandom and opened it up to more people. ICP has seen criticism for misogynistic and homophobic lyrics, but online, fans have found ways to be more visible. The Facebook group Lette’s Respect grew as a feminist movement within the community, and on Twitter there are accounts signal-boosting for LGBTQ Juggalos and Juggalettes. A new generation is discovering the fandom, like 17-year-old Jaina.

“I was swayed by the media and internet’s image of them as all violent and stupid, but I soon realized that is all just typical classism,” she tells the Daily Dot. “I am working class too and sort of an outcast. I always liked the music, I just didn’t want to get into the culture, but now I love the culture! I love the aesthetics, the camaraderie, and the message: Be yourself no matter what people think of you. “

“My other issue was I was worried about being not only a girl, not only a bi girl, but a bi trans girl. I was worried I wouldn’t be accepted or welcomed but then I met some really great friends who were also trans Juggalettes and that’s when I started to really feel welcome and feel like I was really a Juggalo. I feel if more people met Juggalos like them, whether that be Juggalos of color or LGBT Juggalos or feminist Juggalos, then they would have a similar story to tell and they would eventually come around,” she adds.

Tina Renew, founder and co-owner of JuggaLGBT, says that the theme of family, love, and acceptance has at times been at odds with Juggalos who hold racist or homophobic views, but she’s seen support with her own journey: “I’m a Juggalo because I’m a good person with a warped sense of humor. They also accepted my transition faster than my blood family did.”

On Sept. 16, Juggalos are set to march on Washington in a colorful display of clown love, and to reclaim their identity.

In 2011 the FBI labeled Juggalos a “loosely organized hybrid gang,” citing crimes committed by alleged Juggalo associates, and 21 states where there are “criminal Juggalo sub-sets.” The report states that “Juggalos’ disorganization and lack of structure… makes it difficult to classify them and identify their members and migration patterns.”

While that report is no longer published, this became a matter of principle for ICP and fans, who reportedly saw real-world effects from the assignation. The march is in protest of that label, and it’s a pivot for Juggalos, who have existed as a largely misunderstood musical subculture for the past two decades.

ICP partnered with the ACLU to sue the Department of Justice in 2014, and fans got involved too. Violent J (real name Joseph Bruce) and Shaggy (Joseph Utsler) made impassioned statements about it.

In a space suddenly flooded with labels, Juggalos are trying to break free of one.

The Juggalo March on Washington fatefully falls on the same day as a pro-President Donald Trump rally, and the 2017 Juggalo exists in a much different space than 1997 or even 2007. Over the last year, labels have emerged to espouse extreme, white nationalist views (alt-right, Proud Boys) and represent those in opposition of fascism (antifa).

After the march was announced, there were jokes. People still don’t know what to make of adults dressed as clowns. If you do a close read, ICP has always been a group for the working class—the broken homes, the vulnerable and isolated, the losers. There’s the 1992 song “Your Rebel Flag,” which consists of the chorus “Fuck your rebel flag,” and the 2015 track “Confederate Flag,” the chorus of which is fairly similar, though the lyrics are still resonant: “Rednecks call it pride / Pride for what / White pride for slavery it sickens my gut.”

ICP and its label, Psychopathic Records, have grown a roster of hip-hop performers with similar worldviews—on display during the group’s annual Gathering of the Juggalos—into an empire. In 2009 ICP saw its first viral hit, the world-bending “Miracles,” which quickly became a meme.

And while the Juggalo March was allegedly foreshadowed in “Miracles,” Psychopathic Records’ Jason Webber says the idea has been around for about four years.

As the case tumbled through the courts, the march’s urgency only increased. Last year the Sept. 16 date was announced at the Gathering of the Juggalos in Ohio, during a politically fraught summer. A few months later, critic and Juggalo Nathan Rabin published 7 Days In Ohio: Trump, The Gathering of the Juggalos, And the Summer Everything Went Insane, which chronicles the event and the Republican National Convention.

“We’re not worried about what they’re doing,” Webber says of the pro-Trump march. “We’re just focused on making sure that our message gets across loud and clear. Insane Clown Posse and Psychopathic Records have always been apolitical. They’ve never taken any kind of political stance on either side of the aisle.”

Webber admits they have taken a stance against racism in many of their songs, “motivated by human decency rather than politics.”

In a promo video for the march, ICP’s members break down what they’re fighting for and count off how they’ve been discriminated against. Their “Juggalawyer” Farris Haddad explains how the gang label has prevented ICP from getting booked. Toward the end, Violent J exclaims: “Ninjas are being punished for waving our hatchet flag in public, rocking a tattoo. That’s fascism, and it’s fucked up!”

Webber, who’s been a fan since the late ’90s, wasn’t surprised at the pivot.

“Juggalos have always been the outcasts and the misfits of society,” he says. “Juggalos are the last real subculture left in America, if you ask me. We’re used to being the underdog.”

An overlap between Juggalos and Trump supporters exists, but the Juggalo-antifa alignment is a little more visible online. Twitter accounts have popped up and produced some genuinely great protest art and memes. On Sept. 1, the Industrial Workers of the World, which counts Juggalos among it, released a statement of support: “Marching with the Juggalos is a way we can demonstrate our solidarity with fellow working-class people. It creates a bridge to support Juggalos in other issues that we hold dear, such as workplace organizing, community organizing, and fighting the prison-industrial complex.”

Jugga J, a representative from the @JuggaloAntifa account, says “a Juggalo is always a Juggalo but we don’t always have the paint on, right? Same shit with antifa. We always antifascist but not always in the black masked up, you feel me?”

Jugga J also sees the danger in placing labels on or condemning an anti-fascist movement: “Call them terrorists, then who isn’t a terrorist, you feel me? If Juggalos is a gang and antifa is terrorists then where does it stop, you see?”

The Twitter account Struggalo Circus debuted in June, and a post from July describes it as being “all about networking revolutionary Juggalos with other ninjas fighting the system.” The account has offered a thorough guide on how to stay safe at the march. During the Gathering of Juggalos this summer, it offered tips on knowing your rights if you’re pulled over.

Rumors of cop checkpoints as people leave Gathering of the Juggalos. Know your rights in OK. #gotj #GOTJ2017 #gotj18 https://t.co/784kjaXO12

Struggalo Circus co-creator Kitty Stryker says the account started “in part because of the march on D.C. We wanted to give Juggalos some tips on protest skills to help them protest safely and know their rights.”

Still, Stryker sees misconceptions about Juggalos. “You can see how surprised [people] are on Twitter about Juggalos being anti-racist,” she says, “but if you listen to their music, they’ve always had that as an ethic. They’ve also always been pro-working-class struggle, even if they consider their work apolitical.”

Stryker is relatively new to the Juggalo family, but Struggalo co-founder “Ape Boy” and his mom are both fans, which reinforces the family aspect of the fandom. “There’s also a lot of accountability for behavior I really appreciate, and generally a willingness to respect difference and diversity,” she says. “That doesn’t always come through in the music, but it definitely comes through in the community.”

But, as with all movements, there’s still some room to grow in terms of organizing and building up the resistance.

“The left has struggled a lot with intersectionality and having a united front,” Stryker says. “We’re often bad at listening to the marginalized among us, and having unity. We have different end goals and sometimes that’s used to splinter us. What we love about Juggalos is the sense of family and mutual aid—working together to care for each other first and working out the details for mutual respect as we go.”

On Saturday in D.C., that will be put into practice. What is a Juggalo? We’re about to find out.