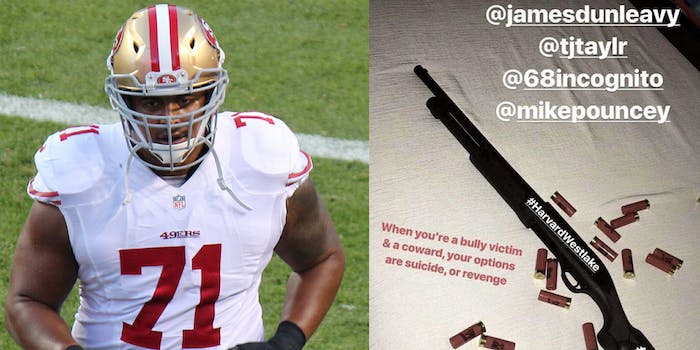 Was he threatening his school?

Former NFL player Jonathan Martin was detained at a Los Angeles-area hospital where he went to seek treatment Friday after a threatening Instagram post he made led to his former high school closing for the day, according to USA Today.

“The individual believed to be responsible for the social media post is being detained, however he is not in police custody,” LAPD spokesperson Tony Im told USA Today. “The investigation is continuing, but rest assured we believe there is no threat to any school in the L.A. area.”

San Diego-based defense attorney M. Dod Ghassemkhani said when an individual is listed as detained but not in police custody, they are usually under a psychiatric or medical hold.

While LAPD could not confirm the reason for Martin’s arrest, it’s believed it’s because the former Miami Dolphins offensive lineman posted a disturbing message on his Instagram about his former high school in the Los Angeles-area, Harvard-Westlake.

“When you’re a bully victim & a coward, your options are suicide or revenge,” Martin wrote in a photo of a shotgun with shells around it posted to his verified Instagram account. He used the hashtags #HarvardWestlake and #MiamiDolphins.

Hope Jonathan Martin gets the help he needs. Disturbing post on his IG directed towards Richie Incognito and Mike Pouncey… mental health and bullying is still a major part of this discussion pic.twitter.com/RXVVDYj5Wm

Martin also tagged former fellow NFL players, including Richie Incognito—who was accused of bullying Martin when they were teammates in Miami—as well as Mike Pouncey. He also tagged James Dunleavy, who attended Harvard-Westlake and was a walk-on basketball player at the University of Southern California.

Harvard-Westlake was shut down for the remainder of the day after Martin’s post was reported to police.