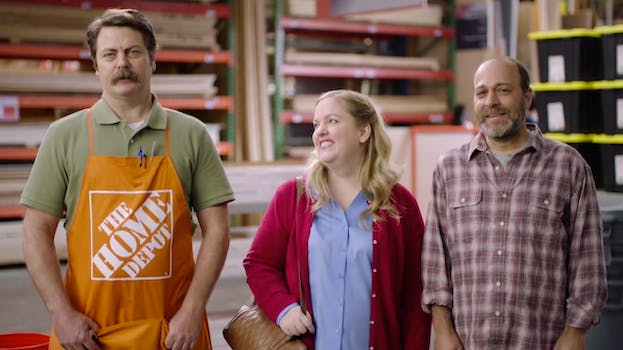 Not even robots can replace the human touch of a hardware store sales rep/marriage therapist.

The latest front in the war over human-cyborg relations is Lowe’s, which is replacing some of its sales representatives with robots in its smaller stores. Lowe’s claims that the move will help customers find the products they want, but as John Oliver points out, we’re really missing out on something special when we mechanize sales assistance. A robot can’t break up an argument between a couple, each of whom insistent on realizing their particular idea of home improvement.

With the help of Archer star H. Jon Benjamin and Tammy actress Sarah Baker, Offerman demonstrates the advantages of flesh-and-blood salesmen and -women closing deals at America’s appliance stores. Yet even Offerman’s soothing voice can’t defuse every tense situation. There may be some sales-help conundrums that are difficult to sweep under the rug with an alternative redecorating option.

Home improvement therapy might end up being more expensive than marriage therapy, but in the long run you’re saving your marriage—and your house.