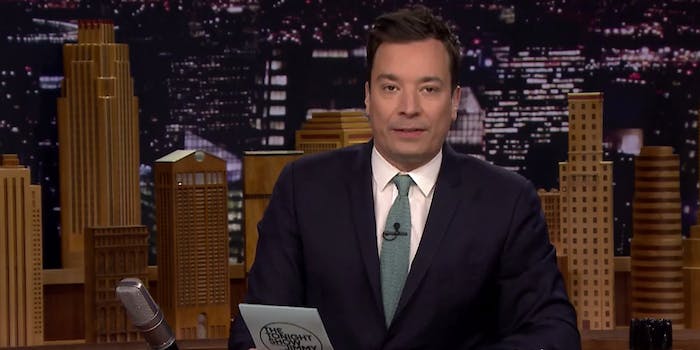 But the Wall Street Journal (WSJ) was curious about how much NBC would rake in from ad revenue if the network chose to run ads against Fallon’s channel. The publication spoke to video analytics firm OpenSlate and found NBC could potentially bring in up to $12 million a year from ads on the Jimmy Fallon YouTube channel.

OpenSlate reached the $12 million sum based on a few assumptions. First, the firm clarified NBC and YouTube would likely sell ads to U.S. advertisers only, cutting out about half of Fallon’s viewership, which comes from international locations. Second, OpenSlate arbitrarily guessed NBC would run one ad for every four views on the Jimmy Fallon YouTube channel.

Within those parameters in place, OpenSlate noted how popular Fallon’s channel is on YouTube; it boasted over 6.5 million subscribers and 333 million video views in the month of February alone. Those stats mean the NBC-owned YouTube channel could be included in the site’s premium Google Preferred program, commanding an estimated CPM (cost-per-thousand clicks) rate of $25.

At that rate, OpenSlate guessed NBC would pull in $500,000 to $600,000 each month from ads on The Tonight Show’s YouTube channel. This comes out to an extra $7.2 million per year for the network.

OpenSlate also noted that figure could jump to $9 million a year if NBC and YouTube struck a deal to sell ads outside of the Preferred package, at a higher CPM rate of $30. This higher revenue number would be due to the fact that NBC could take home 100 percent of ad revenue after Fallon’s channel hit YouTube’s revshare cap.

Pushing assumptions even further, OpenSlate guessed NBC could potentially pull in up to $10 or $12 million a year if YouTube was willing to take a smaller cut of the ad share (like how the new online video platform Vessel only keeps 30 percent of ad revenue, leaving 70 percent of the earnings to creators).

Despite that extra income potential, NBC believes just having Fallon’s content on YouTube is good enough for now. “Even though we’re not monetizing it, the option B is not using [YouTube] at all,” said NBC’s Executive Vice President of Digital Media Rob Hayes, in an interview reported by WSJ. “If and when we have a relationship with YouTube, we’ve got a critical base [of fans]. And you learn over time. If we did nothing over last several years we’d be that much further behind in learning about YouTube.”

Wall Street Journal and OpenSlate are, of course, just speculating about what would happen if NBC changed its mind and started to run ads against the Tonight Show YouTube channel. And while a massive media corporation like NBC may just bat an eye at the prospect of earning another $7-12 million a year, the numbers are nonetheless fascinating.