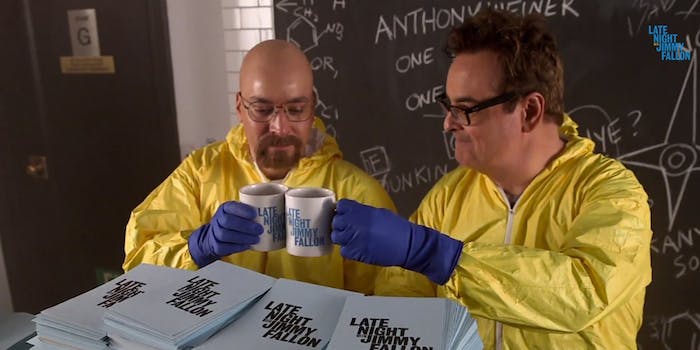 And with those two words, Jimmy Fallon broke bad and launched his biggest TV parody to date: a 13-minute ode to Breaking Bad with no less than three cast-member cameos.

Donning Walter White’s signature green shirt, bald head, tighty whities, and goatee, he and his usual crew of Steve Higgins, the Roots, and enough subtle nods and references to please even the purest of fans, Falsenberg and Jesse are writing more jokes than they know what to do with. But with the head writer on their tail, Gus is willing to help them out with their supply.

Those jokes are the purest piece of comedy on the black market, and it might even be enough to finally laugh someone’s ass off.

But from Fallon, who’s also created elaborate Downton Abbey and Game of Thrones sketches, that’s not really a surprise.

While 13 minutes may seem like a lot of time to devote to one video, stay until the end. That final cameo is worth it, bitch.