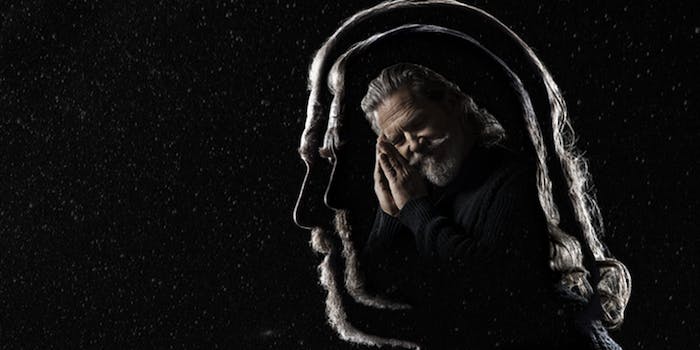 "If you want, we can pretend to be crows."

I sat in a harshly lit diner, alone. I’d never been to this restaurant before, but the wood-paneled walls and bright orange tables still felt familiar. There was someone clattering around in the kitchen, but I couldn’t see their face. Outside the diner, the ocean was lit by an impossibly bright moon, one that took up half the slate-colored sky.

Someone was slowly lumbering up the path from the ocean to the diner, wearing full-body armor from the chest down that glittered in the moonlight. When I looked back, the mysterious beach knight was sitting across from me, sporting a man bun and comically oversized sunglasses.

“Stop,” he said, his drawl familiar. “Stop and look up or you’ll miss it.”

I looked up, and then the knight was gone. Jeff Bridges made me look.

During the Super Bowl, Web design company Squarespace aired a commercial featuring Bridges chanting a couple to sleep. This aimed to promote its new project with the actor, titled simply Sleeping Tapes. It’s modeled as a 15-song tape, complete with A and B sides, and Bridges talks, chants, and hums in an effort to send you off to sleepyland, or at least relax you. You can download the album for free, or make a donation to No Kid Hungry, for which Bridges is the national spokesman.

For the last two nights, I tried to fall asleep listening to the tapes. The first night, Super Bowl Sunday, my brain was too chaotic to really let go and dive in. But last night, the Dude arrived. I think.

As weird as this idea is, it’s still a branded project with an ad firm and well-known face behind it. Squarespace founder and CEO Anthony Casalena told the Daily Dot they “worked with Wieden+Kennedy NYC as our creative partner, who led the creative development of the idea. Jeff was really drawn to the tapes idea, and added a lot to the project. He had major input on everything in the project and added a lot. All parties really give a lot to this project. Wieden brought the idea together and helped with art direction, we helped with site design, Jeff enlisted help from some of his friends to assist with creative and mastering. I’m really proud of what we were able to pull off together.”

So has Casalena nodded off while listening to Bridges talk about being shot into space?

“While I haven’t fallen asleep to them, I’ve listened to them many times over,” he said. “I absolutely love them. My favorites are ‘Ikea’ and ‘Temescal Canyon.'”

Sleeping Tapes‘s introduction is a rambling exploration of sleep and recorded tapes and the past and the future, as Bridges fumbles around for meaning. (“Everything implies everything else,” he offers. “I hope you dig the sleep tapes.”) The next few songs are fairly chill: “Hummmmmm” is just Bridges doing that for two minutes. On “See You at the Dreaming Tree,” Bridges describes meeting his daughter in his dreams. On “A Glass of Water,” he talks about how waking up to drink water at night is good, because you can see the patterns moonlight leaves on the floor, man.

On “Ikea,” he explains how he’s going to be shot into space after he dies, and orbit the Earth forever. (I’d also watched Insterstellar before bed recently, and I think there was a subconscious McConaughey/Bridges man-bun mashup happening in the dream.) The 11-minute “Temescal Canyon” imagines a hike up the titular canyon “in our minds,” as Bridges huffs and puffs up the hill, pointing out a hawk, or maybe a crow, flying overhead.

“I don’t know,” he says. “It’s majestic though, isn’t it? Makes you wish you had feathers. If you want, we can pretend to be crows.”

It was during this song that I believe I drifted off and imagined meeting knight Jeff Bridges in my mind diner.

(On the site, there’s also a behind-the-scenes video in which Bridges explains how he recorded the sounds for the album. I never thought I’d see the day when Jeff Bridges was teaching me how to design a website.)

The flow of the album isn’t exactly conducive to drifting off, at least not like some of the more hypnotic sleep videos you can find on YouTube. There’s a lot of background noise. When you’re listening to it, you’re listening to Jeff Bridges. You’re envisioning Jeff Bridges (with a man bun, apparently). It’s hard to untangle that voice and Bridges’ movie work from the unconscious mind. It’s hard not to imagine the Dude.

It’s an interesting experiment, however; besides, say, Benedict Cumberbatch or Helen Mirren, I can’t think of another actor more suited to intentionally lull someone to sleep. I still don’t know what he was trying to show me, but I’ll look for you in my dreams tonight, man.