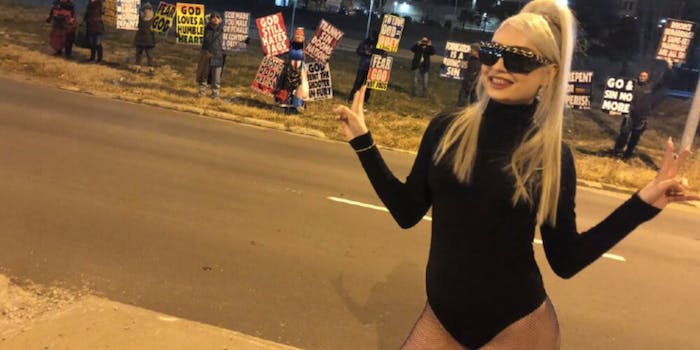 The church, which is known for its anti-LGBTQ stance, said the “lord [was] willing” a protest against the transgender celeb. In a viral video posted on Sunday, Petras had a mini-photoshoot in a black unitard and knee-high boots in front of the protesters outside her concert.

The church had announced its plan on Thursday via Twitter. The flyer stated that this generation was “debasing themselves in every imaginable and unimaginable way.”

Petras released an “official statement” about the church’s protest this weekend. It was a video of her dancing to the song “Hoes Mad” by Famous Dex with the caption “idgaf.” (That’s internet slang for “I don’t give a fuck.”)

this is my official statement on wbc picketing my show in kansas tomorrow. this is the energy i’m bringing n it should be yours too 💓 https://t.co/eENYnhCMJg pic.twitter.com/7CO8JSUbdj

kim petras taking pics in front of the wbc picketing her show? yeah i don’t know a better person pic.twitter.com/uMoJfLl17I

kim petras having a full on photo shoot in front of the wbc……a national holiday. pic.twitter.com/0zMgVsEZkv

kim petras and the westboro baptist church are out here partying with jesus! pic.twitter.com/3nqZ6b5cdd

Petras became famous worldwide in the 2000s for her appearance in a documentary about reassignment surgery. She was thought to be one of the youngest people to go through transition. A few years later, she became a model and then began releasing music.

She’s on tour to promote her 2019 album Clarity.