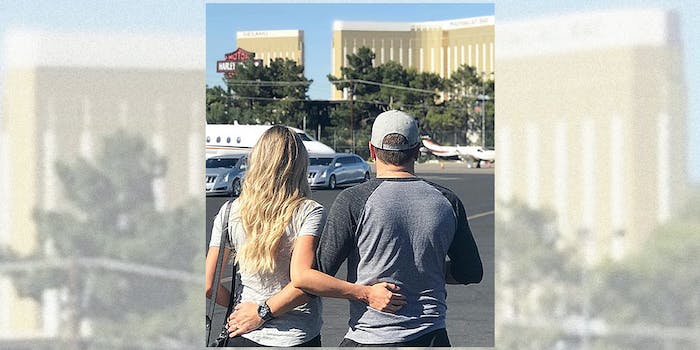 'Feels surreal being back in Vegas.'

Less than 48 hours after opening Saturday Night Live with a poignant cover of Tom Petty’s “I Won’t Back Down,” country singer Jason Aldean and his wife returned to Las Vegas, the scene of the shooting that killed 58 people and injured more than 500 while he was playing a concert at a country music festival.

As Brittany Aldean wrote on Instagram, their return trip to Las Vegas felt “surreal” as they looked at the Mandalay Bay hotel, where Stephen Paddock fired from the 32nd floor.

On Saturday night, Jason Aldean opened SNL by saying, “So many people are hurting. There are children, parents, brothers, sisters, friends. They’re all part of our family. I want to say to them, ‘We hurt for you. And we hurt with you.’ But you can be sure that we’re going to walk through these tough times together every step of the way. Because when America is at its best, our bond and our spirit, it’s unbreakable.”

Our extreme gratitude to Country Music Star Jason Aldean for visiting UMC today. Jason spent time with our patients who…

On Sunday night, the Las Vegas strip went dark for 11 minutes to pay homage to those who were killed.