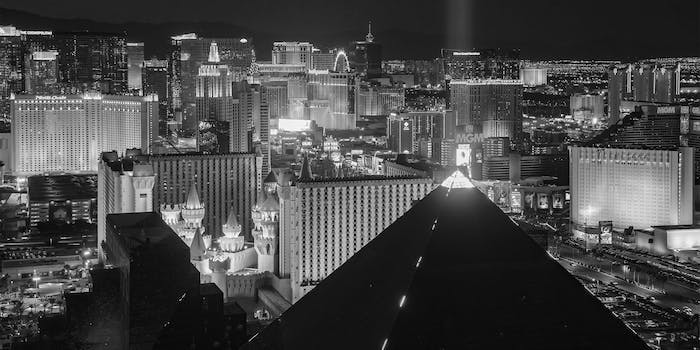 The fluorescent lights of Las Vegas Strip went dark Sunday night, a week after the deadliest mass shooting in modern history left 58 dead and more than 500 injured at a music festival in the city.

Starting at 10:05pm and lasting for about 11 minutes—the length of time shooter Stephen Paddock fired into the crowd from his Mandalay Bay hotel room—more than 60 businesses along Las Vegas Boulevard dimmed their lights, with the music on the center strip also cut for the memorial, according to the Las Vegas Review-Journal. Afterward, marquees across the strip displayed “When things get dark, Las Vegas shines,” including one on Mandalay Bay. The message is expected to rotate on marquees through Monday morning.

The marquees of the Las Vegas Strip go dark in a show of unity and strength for the victims and their families. #VegasStrong pic.twitter.com/dz8T3Oytvz

While not every business participated and many left facade lights on, crowds appeared moved by the tribute. According to the Review-Journal, a large group gathered around a pile of flowers near the Mandalay Bay during the blackout, with many cars honking at the marquee message that followed.

“It was like, everyone here took a minute and stopped,” visitor Jasmine Manuel from Atlanta told the Review-Journal. “Everyone’s here from all over, and they’re here for different things, but for 10 minutes we were all here together.”