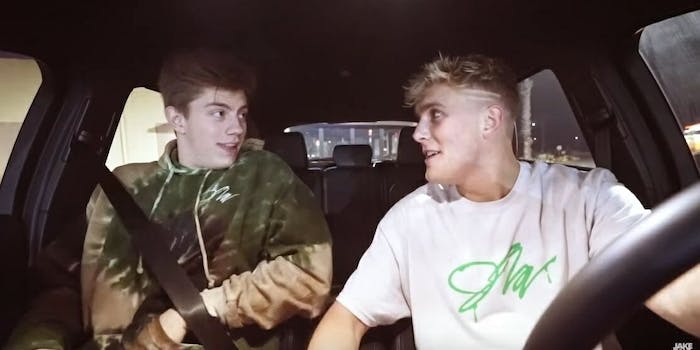 On Monday, Paul tweeted that everybody “out here acting like they making moves.. snap chatting new homes & shit but they still owe me money don’t think I forgot. I got bigger fish to fry but it’s just got me over here laughing at how broke y’all really be #StickToTheCode.”

It was a not-so-subtle diss at his former business associates.

but they still owe me money

Though Paul doesn’t call out Sutton by name, it’s probably no coincidence that Sutton, earlier in the day, tweeted this.

Moving into a new house today 😅

He also wrote, “On the real though moving is such a mission. Just wanna be done and gaming haha.”

Paul and Sutton are longtime friends, but Sutton left Team 10, Paul’s social media incubator group, in May along with a host of other YouTubers. At the time, Nick Crompton, Team 10’s former chief operating officer, put part of the blame on Paul’s dad, Greg Paul, for being verbally abusive.

Clearly, Jake Paul still felt the sting from those departures, and during episode 5 of Shane Dawson’s YouTube documentary, he accused Sutton of stealing the YouTube channel co-owned by Sutton and current Team 10 member Anthony Trujillo. Paul said Sutton took control of the channel by changing the password and locking out Trujillo from the account.

Sutton, though, forcefully denied that charge and said Team 10 actually tried to take the channel from him as he was leaving the group, calling Paul’s claim “the biggest lie.”

The night before he left Team 10, Sutton said he added his personal email address to the account so he couldn’t be locked out. Almost immediately, Sutton said, the password was changed by Team 10, and he received a text from Trujillo, who apologized and said Jake Paul and Greg Paul made him amend the password.

“But since I was a manager,” Sutton said, “I was able to still go in and change the password again and log everyone else out.”

Later, Sutton tweeted, “It’s so shocking how many of you believed I stole it right away. Like everything that’s said is always true?! Be smarter about what you believe on the internet.”

During the Dawson documentary, Paul took issue with those who left Team 10, saying, “Everyone who’s left has used us. I don’t think they realize they used us. But when these people come into Team 10, I give them everything: managers, agents, house, food, money, places to live, fame, cameramen, editors, brand deals. Everything. I give it to them. Then, they forget where they came from after a couple of months, and they’re like, ‘Oh, I can do this on my own. Why is Team 10 taking a percentage of my earnings?’”

It’s long been rumored that when Team 10 members sign their contract, it states that a percentage of their earnings (it’s said to be 20 percent) goes to Paul for a set number of years. Paul confirmed that to Dawson, but in an earlier interview, Crompton said that the money wasn’t going directly into Paul’s pocket. Instead, Crompton said Paul takes that money and invests back into Team 10.

Either way, Paul made the insinuation that Sutton owes him money, that Sutton is broke, and that he hasn’t forgotten about it. Later on Monday, Sutton tweeted this.