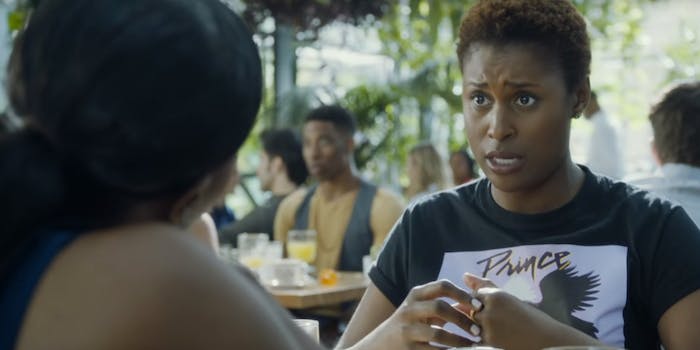 She's in post-production for her HBO series. But a girl's gotta stay busy.

Issa Rae is in post-production for her forthcoming HBO show Insecure, set to be released on Oct. 9. But the breakthrough star is also working on a million other projects. A girl’s gotta stay busy.

She is best known for her popular webseries Awkward Black Girl, which premiered on YouTube in 2011 and ran through 2013. The show chronicled the work, love, and anxieties of a quirky, black woman named J, played by Rae. The comedic moments spark because of the tension between J’s interior monologue, which the audience hears, and what she actually says out loud to people around her.

“I wanted to tell the comedy of awkward situations, so it was just about creating a character who I thought could be relatable, but that wasn’t necessarily me,” Rae tells the Daily Dot. “I say that J is 30 to 40 percent of me.”

As Awkward Black Girl started picking up speed in 2011, and she got an agent and a manager, Rae decided quit her day job.

“I quit the job and I was out,” says Rae. “And then I was poor. That was around the fifth-ish episode of ABG.”

Viewers of ABG from the early days will remember the Kickstarter notices that started occurring, specifically on “The Date” (season 1, episode 7): “If we don’t hit our target goal by August 11th, this will be the LAST episode of the season.” Rae was in a risky situation, having quit her job and putting all her energy into the show. That was five years ago, but Rae still stands by her decision.

“If I hadn’t quit my job, I wouldn’t have done the Kickstarter—so many things wouldn’t have happened,” says Rae. “It’s so hard to have a nine to five and try to be creative in the evening, or schedule everything on the weekends because you have to.”

As a ‘90s kid growing up in Los Angeles, Rae loved shows like Saved by the Bell, A Different World, Seinfeld, Living Single, and Friends.

“I wrote fake episodes for all those shows,” says Rae. “There were people in front of and behind the camera, and I thought I could grow up to do that.”

Unfortunately, the shows she started to see become popular presented flat characters who weren’t empowering, exciting, or even three-dimensional like the ones she grew up with.

“Once I got to high school and college all we had was reality TV, women hating each other, men being criminals,” she explains. “I’m definitely a product of the ‘90s—I was into movies like Love and Basketball, all those types of regular-people black movies.”

Awkward Black Girl mirrors many of Rae’s TV interests growing up—along with some other awkward moments tacked on, since usually in sitcoms the “nerdy” or “antisocial” girl is overshadowed by the cool, popular girl. Her character is also not particularly sexualized, and viewers get a lot more insight into who J is for that key pivot.

Like most people who go on to do TV and film, Rae got her start in the theater. In fact, it was the reason she moved to New York after graduating from Stanford in 2007, majoring in African and African-American studies.

In 2007 she arrived in New York with a scholarship from the Public Theater and a mockumentary/soap-like series Dorm Diaries that she planned to pitch to MTV. Things didn’t pan out.

“I was a huge lover of theater, but when I got to New York City, the theater snobs rubbed me the wrong way,” she says. (Even though snobbery drove her out of the theater, Rae admits that she still “secretly loves plays, but not musicals,” and is “still an in-the-closet theater fan.”) When she was still in New York, making the transition to TV, her Washington Heights apartment was robbed, and thieves took her equipment, pitch reel, and scripts.

This creative calamity was her turning point. Hanging out in her apartment journaling, she wrote the words: “I’m awkward. And black.” She posted it to Facebook, and her friend Tracy Oliver, who would end up playing antagonist Nina on ABG, replied in self-deprecating jest: “Those are the two worst things you can be.”

That became the opening line and ongoing theme of Awkward Black Girl, as well as the template sketch for Rae’s character J, who is super awkward. Her interior monologue and habit of writing passive-aggressive raps, which she only shares with her bestie Cece (Sujata Day), shows the audience how she really feels about what’s happening.

In 2009, feeling done with New York theater, Rae made the decision to move back to Los Angeles. She grew up in the View Park-Windsor Hills area of South L.A. with four other siblings. (She now lives in Inglewood, where her production studio is also located.) Though she spent her formative years in L.A., at other times in her childhood she lived in Dakar, Senegal—where her father Abdoulaye is from—and in Potomac, Maryland. On the East Coast, she was the only black girl; in L.A. she was labeled as the black girl who “talked white.”

When she entered adolescence, like all teens she wanted to be noticed—and boys did, but for what she describes as all the wrong reasons, as she writes in her bestselling memoir, The Misadventures of Awkward Black Girl: “[T]hat didn’t help my quest: my nap-rural hair, my underdeveloped, seemingly concave breasts, my white-girl accent, and my tomboyish appearance.”

And like any kid who grew up on TV in the ‘90s, she learned many of those signature teen romance moves from the tube: “I blame any misread social cues on Saved by the Bell,” she writes in her memoir. “Zack and Kelly’s romance was something I wanted so badly to emulate.”

The romance in Awkward Black Girl is, thankfully, nothing like Zack “Preppy” Morris and popular girlfriend cheerleader Kelly Kapowski.

“POC [people of color] are always having to think about how they are being perceived, making people feel comfortable while navigating their own insecurities,” says Rae. “That’s something I find interesting and compelling, and that’s something that non-people of color can’t relate to.”

In Jenna Wortham’s profile of Issa Rae in the New York Times magazine, she describes J’s inner monologue/ voiceover as a manifestation of the W.E.B. DuBoisian “double consciousness,” which she said is a part of the black experience in America: “[Y]ou’re always looking at yourself through the eyes of others, and trying to pre-emptively understand what judgments and opinions they may be making about you.”

For queer people and queer people of color, there is a similar sentiment—though for those who pass as straight because they look heteronormative, there is also an implied invisibility and the constant decision about whether or not to come out. ABG goes there.

In season 2, episode 1 “The Sleepover,” J comes to work wearing her boyfriend White Jay’s (Lyman Johnson) clothes, and so her appearance is more on the masculine side of the gender spectrum. A new co-worker, trying to be politically correct, keeps telling her that it’s OK to come out of the closet, and goes so far as to hand her pamphlets for an LGBT support group. The irony here is that actually J is straight, and wearing her boyfriend’s clothes, but wouldn’t say anything to her co-worker. Instead, she’ll just think and internalize it, and the viewer will hear her signature awkward thoughts. This kind of masterful play on identify is what kept viewers hooked on the webseries during its YouTube coming of age.

Though Rae is focusing on wrapping up Insecure, she has several projects in the works through Issa Rae Productions. When we talked, she was in the middle of recording a second season of the podcast, Fruit, about a black football player exploring his sexual identity, as well as a webseries about the team behind Issa Rae Productions. She’s still working on Color Creative, an initiative dedicated to helping women and minority writers. She’s also working with Adaptive through HBO’s Project Greenlight, a competition with the goal of producing an original digital series in which users vet the idea, and the winning creator gets $25,000. (Project Greenlight was canceled by HBO in July 2016.) Production begins this month.

“We’re filming six episodes, and they [the participants] have been part of the process from pre-production and will be until post,” Rae says. “It’s meant to give emerging voices a chance to have the experience they need to be in a writer’s room. Usually people don’t get hired because they don’t have the experience, so these are some of the things we’re working on.”

Rae remains mum on most details regarding her upcoming HBO show. She knows it’s an important project with ramifications bigger than her individual success. But she’s plenty ready for the challenge.

“I feel like I am a part of what I hope is a huge change,” she says. “I hope we can stop using the word ‘diversity’ and start using the word ‘normal,’ and then one day look back be like ‘Wow, remember when it wasn’t like this?’”