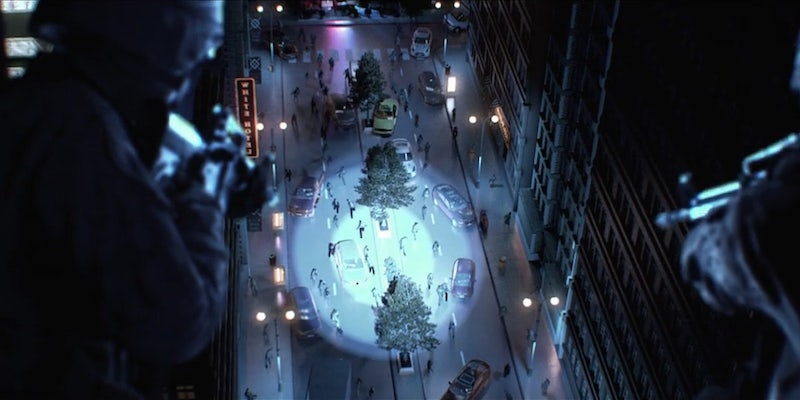 This independent, computer-animated zombie film is an amazing achievement.

animators and budgets roughly equivalent to the GDP of a small island country. But, like the rise of

digital cameras, the technology has grown progressively more populist as it has grown

when it was released last week, and with good reason: It might be the first time that the creator of an

live-action footage was mixed into the final product. On our first viewing, we thought David Fincher-esque techniques were being used to mix CGI with long live-action takes, but no: Everything in Isolated

was mapped and rendered on a computer. And it’s absolutely stunning.

have been, logistically, entirely outside of his wheelhouse: In 2012, he released The Chase, a 12-minute,

dialogue-free animated film that was made, according to TwitchFilm, in an isolated cabin in the woods

for a budget of $700. It’s not like we needed any more evidence that 2012’s animated feature Foodfight!

was bad, but, when you compare it to what Vergara pulled off with three figures in a cabin that same

The biggest question from fans of Isolated has been whether we can expect more of it. The Daily Dot

off the technical achievements on display in Isolated:

Going forward, do you have an ideal format for the story? Would you prefer it to be a feature film or an ongoing webseries?

We’re always thinking we should just make it awesome. We love films, games and every form of entertainment.  So, no, not yet. Now if you ask me personally, I’d tell everyone to go screw themselves and make it a blockbuster. But that’s me.

How many animators worked on it? It looks incredible, I’m kind of blown away that this short came from an independent studio. It puts some really expensive work by large studios to shame.

A lot of the animation was actually performance capture, so staying a bit ahead of the technical, I think most of the compliments go to Tomas Verdejo and Luis Gnecco, the actors. If we went for fifteen shots, we picked the one that worked the best. And Tomas was a hardcore stunt man.

Is the overall story already worked out?

It is! More action, drama, scale, intensity and eye candy. If you liked this one, you’re gonna die with the next. And we kind of leave aside the oversaturated zombie thing. What matters to us is that you root for this guy, so infected people were kind of a vehicle. Even if you like them a lot, in this story it goes secondary.

Can you tell me anything about the background experience of the folks at Peak Pictures?

Me and Ian Mery, we come from the advertising industry here in Chile. Making a lot of complex CGI, we figured why not use it in something more ambitious. So we decided to go our own way and invest on this piece to see what happens. And it’s been going interestingly good so far.

Are there any particular zombie stories that inspired you in the writing process?

My brother pitched me the original idea, and I think the story that inspired him was the ending of The Sixth Sense. Then I kind of put it in a blender, and gave it some Memento and Gravity kind of thing. The Dark Knight inspired a lot of the scenarios. So, not much comes from the zombie world but more about just good intriguing films, which was our biggest concern… I guess we ended up with a very strange animal, but feels super good right?

The setting looks like New York. Any particular reason you picked there as the location? Do you think the story will stay there for the future?

It made sense to use the code “city” without having anyone from anywhere thinking “Hey, what city is that?” but instead just “Wow, that dude’s so fucked in that abandoned city,” right? So you don’t get confused with those little things and just follow the story. And plus we feel the scale, which we think always adds to the experience.

I know you probably can’t divulge too may details on the future story, but the Daily Dot staff is collectively extremely interested in the lottery ticket, so I just have to ask: Can you tell us anything about what’s written on it?

I could tell you that, but then your friends wouldn’t find you by tomorrow. So I do it for you, man, because I care.