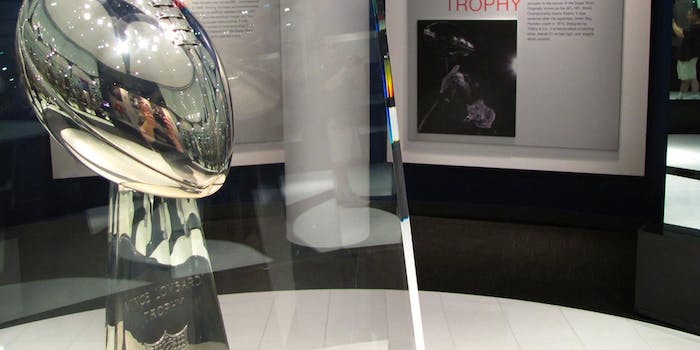 Consider this your most straight-forward guide to understanding, watching, and you know, enjoying Super Bowl XLVIII.

This Sunday, the Seattle Seahawks and Denver Broncos will face off for the NFL’s highest honor in Super Bowl XLVIII. And from team highlights to alternative games to even a full explanation of the game, the Internet has you covered as the big day approaches.

No cable? No problem

Obviously, cord cutters who want to watch the game will be at either NFL.com or FoxSports.com, where the entirety of Super Bowl XLVIII will be streamed live. The only catch is that the famous set of Super Bowl commercials will differ from the televised feed.

Out of sight, but not out of mind

Despite the wider reach of the Big Game, not everyone will be able to devote a full four hours to watching it. Fortunately, fans can discreetly receive a steady stream of updates and alerts to keep them abreast of the action on the field. If this is you, there are app solutions. If This Then That (IFTTT) is a site that creates app “recipes” to enhance your mobile experience, the ESPN app can send constant updates and alerts to fans who may be stuck at work during the game.

If football isn’t your thing, you can still spend Super Bowl Sunday enjoying a different—and far more adorable—matchup: the Puppy Bowl! For the 10th year in a row, Animal Planet will be holding the annual Puppy Bowl, which will stream live from New York City.

If you don’t like football or puppies (what’s wrong with you?), there is still hope for Super Bowl Sunday entertainment, believe it or not! Pounce on over to Hallmark.com and check out the first-ever Kitten Bowl! Hosted by activist Beth Stern and announced by New York Yankees announcer John Sterling, the Kitten Bowl will also be streamed live. If you don’t like football, puppies, or kittens, then you simply aren’t human.

Do football’s complicated, ever-changing, and seemingly improvised rules confuse you? Of course they do! Thankfully, Fraser Davidson explains it all in the video “A Guide to American Football.” Hilarious animation sequences breathe life into everything from the NFL’s organization to the origins of team names… plus about “two hundred pages of regulatory minutiae.”

Wait… who’s in the Super Bowl?

The Seattle Seahawks certainly had an interesting journey from Week 1. Moww Sports’ video reel highlights each and every touchdown scored by the team during their regular season games. While the Seahawks’ best-known video of the season may be Richard Sherman’s famous rant against Michael Crabtree of the 49ers, this touchdown compilation is certainly far more glorious.

In 2013, Denver Broncos quarterback Peyton Manning threw an impressive 55 touchdowns, beating a record of 50 that had previously been held by Tom Brady. Caleb Chase’s video captures each and every one of Manning’s successful touchdown passes throughout the season…so far.

While plenty of Super Bowl talk is focused on the Broncos and the Seahawks, there is also a sizeable amount of discussion about MetLife Stadium, the home of Super Bowl XLVIII. Located at the Meadowlands complex in northern New Jersey just outside New York City, the stadium will be the Big Game’s first-ever home in a non-domed, cold-weather city. Earthcam’s video provides an interesting time lapse of the stadium’s construction from 2007 to 2010.

There you go. Now you’re totally prepared—nay, overprepared—for this weekend. We’ve done all we can, the rest is up to you.