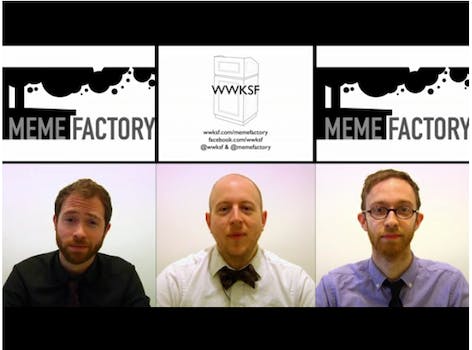 With slideshows and projectors, the Brooklyn-based trio captures the essence of Internet culture—strictly for an offline audience.

Sure, you can catch a good approximation of MemeFactory on Vimeo, where the Brooklyn-based performance group limits its Web presence to half a dozen or so videos. You can see the very same three projectors, (tightly choreographed) power point presentations, and dapper hosts present their faux academic lecture/comedy shows on image macros as art form and how the Internet has totally lost its funny.

But watching those just isn’t the same as being there. It’s like experiencing a mind-blowing rock show on VHS. You miss all the awesome—even when it’s turned up to 11.

And that’s kind of the point.

“Browsing the Web is a really solitary experience,” Stephen Bruckert, 32, one-third of MemeFactory told the Daily Dot via Skype. “But when we all get together in one room and laugh together as a group, there’s something that feels really really good about it.”

“To get the real experience, you have to be in the room,” added cohort Patrick Davison, 29. “That is part of the charm of it.

“We bring the Internet into a real space.”

In an era of truncated attention spans and a cornucopia of easily replicable and digestible content, MemeFactory does the improbable: It transforms a broad swath of a largely visual culture into a marathon, 45-minute lecture that you just don’t want to end. You’ll giggle like a wide-eyed kid who just saw his first animated GIF.

And you’ll learn. Because even though its creators will claim the show is mostly about entertainment (“We don’t want to be responsible for giving real lectures,” Davison said), MemeFactory also forces you to think deeply about the new cultural universe that surrounds us online—what we know and experience every day and yet can’t quite explain.

“As culture becomes more complicated and more intertwined and deviates from the major market were used to, there’s a joy in sharing things that are funny with people who haven’t seen them, and then saying why they’re important.”

Since you can’t approximate a MemeFactory performance by video, it’s a given that doing so with words is even harder. But I’ll give it a try: Take that one professor you had back in college who was actually really funny. Then give him some speed, sit him down, and tell him to sit still while giving a lecture about his favorite subject. Make sure he’s wearing a tie. Add in some PowerPoint slides, two more speed-talking profs, and you’ve got the MemeFactory schtick.

The origin of the MemeFactory crew is just as intertwined with the Internet as you might expect. They all remember growing up around computers and the Internet in the late ’80s and early ‘90s, which, Rugnetta said, made them part of the “first generation that could have grown up with an Internet connection within the household.”

Rugnetta and Davison met online shortly before they both began courses at Bennington College, a small liberal arts school in Vermont. (“I called some guy lame for liking Dave Matthews Band and then he flamed me,” Steve said.)

At Bennington, the three chose majors that—unintentionally—provided a perfect base for the weird media brew that MemeFactory would become: Rugnetta studied musical composition and computer science; Davison focused on digital video and literature; and Bruckert majored in creative writing. All three loved the Internet and performance art. Bruckert briefly worked with a traveling burlesque theater group.

After graduating they worked odd jobs in Boston and New York, including stints doing production work at Know Your Meme, the encyclopedia of Web culture owned by Ben Huh’s Cheezburger Network, and doing performance work in their free time. When a local theater saw one of those shows, they asked Rugnetta and Davison if they’d be willing to do a show all about their favorite YouTube videos. Who wouldn’t? The two wrote up a pitch, only to get denied. The theater changed it’s mind.

But 3rd Ward, an artsy work space in former factory in Williamsburg, Brooklyn, saw that pitch and liked it. Davison and Rugnetta broadened the topic to Internet as a whole, not just YouTube, and brought in Bruckert (“Why stop it at two?” Rugnetta said). Their first show as MemeFactory was March 24, 2009.

The trio expected “literally one or two of our friends to show up,”  Rugnetta, so the group was a little shocked to see 150 fill the little room close to bursting. It didn’t hurt that the New York Times and NBC had written preview pieces about the performance.

Soon enough, MemeFactory was like a hip underground band, playing for crowds that were in-the-know and getting invited to festivals all over the world, including exotic places like Brazil. My first (and only) show was at ROFLcon, the Internet culture conference, in May of this year, where the group pretty much stole the show.

For now, those show-stealing performances are on hiatus. The MemeFactory guys are busy. They’re writing a book and don’t have time anymore for 900 slides and 100 hours of prep work each.

The book will reflects their love and knowledge of generative Internet culture. As they explained at their Kickstarter page for the project: “We’ve … managed to stumble upon what we think are some very interesting ideas about user generated culture, some of which require a little more explanation than a 45 minute lecture with three projector screens.”

The book is crowdsourced and will be released under a creative commons license, which ties in intimately one of the most important lessons the three said they’ve learned over the past three years: When you loosen the reins of creativity and give anyone access to an audience, amazing  things happen to culture. And money messes everything up.

“We are much more anti-corporation than we would have otherwise,” Davison said. “Such amazing creativity, such flowering use of communities online, and we have seen nothing but, almost exclusively, moneyed interests and corporations responding to that in a non-nurturing way.”

That’s partially why best show about the Internet will probably always remain a side project that happens well off the Internet. Davison is working on his Ph.D. in media and culture at New York University, while Rugnetta hosts PBS’s IdeaChannel on YouTube, where he’s tackled everything from bronies to Homestuck. Bruckert continues to pursue a freelance writing filmmaking career, which he’s been doing for the past seven years.

“At the end of the day, the three of us are just friends,” Bruckert said. “Except instead of going to a bar what we do is make hundreds and hundreds of slides about Web culture.

He added: “That’s a little weird.”