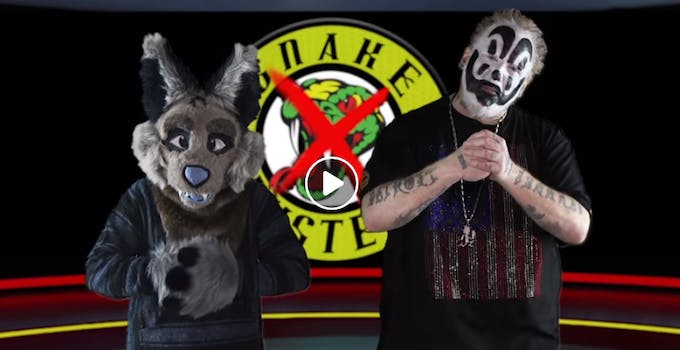 Violent J of Insane Clown Posse doesn’t seem like the type of guy to sit back and let his daughter have all the fun, and he certainly doesn’t appear to be the kind of Juggalo who would stand idly by while his kid got screwed over.

He recently posted a video to the official Insane Clown Posse Facebook page hyping the launch of a new series called The Snake Busters with his daughter, and furry enthusiast, Ruby Beauty Bruce.

The easiest way to explain the idea is to imagine your local news segment where a news crew confronts businesses for shady tactics except the reporter looks like the Ronald McDonald “after heroin” picture. Oh, and the reporter is accompanied on assignment by his daughter who’s dressed like an NBA team mascot.

Here’s the explanation behind the head-scratching consumer complaint.

Yo ninjas! Check out my incredibly talented and charismatically colorful daughter Ruby Bruce Lee and yours truly, The Duke of the Wicked, Violent J in snake busting action!!! As we present to you, the debut of our brand new, much talked about, much anticipated You Tube series called “The Snake Busters!!!

Togeather with our very own, death gripping highly skilled, lightning quick, bare hands, we single handedly and heroically catch, crush and contain the world’s most chaotic, criminal, crooked businesses and maliciously evil, satanic villains to ever inhabit our universe. All types of devious, diabolical, demented, hell dwelling, despicable devils go down thanks to our daughter daddy duo. We doop and scoop them up like dog poop and do away with these dastardly depraved, disastrous and destructive demons.

Unfortunately the bad guys are many and the good guys are few. But the Snake Busters ain’t going anywhere at all! This is just our first of many episodes in the months to come! Many snakes will fall in the future! The Snake Busters won’t stop until all of these damn dogs are done sharing our air and good cheating people out of there honestly made, hard earned money.

Check out our 1st episode and find who the first unlucky snakes are to get caught, fought and damn sure tought a lesson in snake bustage!!!

The costume-makers in question, OISK, seem to have an extensive collection of poorly made outfits and the company name is also a little suspect though incredibly fitting in this case.

We’re not sure if Snake Busters will actually be a running series or if this was a one-time video to call out a company for making awful costumes that take people’s hard-earned money, but we can’t wait to watch what’s next.