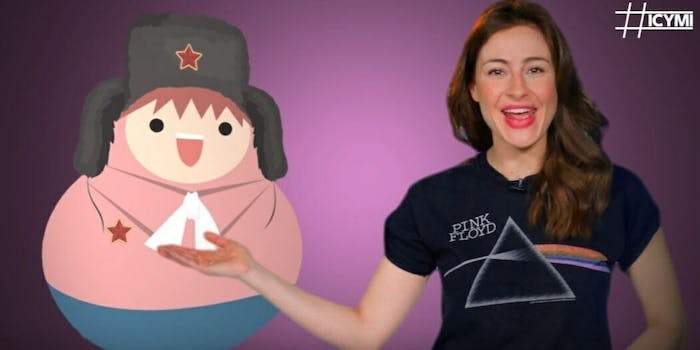 If you didn't know, it'd be difficult to tell.

The ICYMI YouTube channel is a platform for Russian propaganda, according to NBC News, and it’s avoided the YouTube flagging system by pretending to be something it’s not: actual news programming that millennials love to watch.

Viewers might believe they’re watching a normal news hit on YouTube—similar to what Information Overload (1.07 million subscribers) would create—that features a young woman giving a monologue about the news of the day, usually something somewhat quirky. But NBC News discovered that ICYMI’s registration information on its website is the same information that appears on the Russia propaganda network Russia Today (RT), and some of the ICYMI videos use the same talking points as other Russia-influenced channels.

“ICYMI showcases the increasing complexity of Russia’s efforts to spread its talking points across the internet, often in ways that make it nearly impossible to identify such channels as being backed by a foreign country,” NBC News wrote. “The internet-savvy content looks and sounds like many other popular, youth-oriented media brands, helping it avoid YouTube’s new policy of placing banners that denote acceptance of government funding while building up an audience.”

ICYMI—which has about 1,500 subscribers and has racked up about 192,000 views since it launched in January—has made fun of President Donald Trump’s meandering speeches.

And made this video that seems, hmm, awfully pro-Russia.

Its most-viewed video is titled “Whatever goes wrong, you can always blame a Russian!” and it’s a snarky look at how Russia apparently feels that it’s taking the blame for every global wrong.

If you watch an RT video, you’ll see the disclaimer placed by YouTube, saying the channel has been funded by the Russian government. No such disclaimer has been placed on the ICYMI videos.

Boiko’s biography also appears on the RT website, so it’s not as if the Russian news network is trying to hide the fact she works for it. The ICYMI show page also is featured on RT.

RT confirmed to NBC News that ICYMI is part of the network’s family, and YouTube said, “Unfortunately, we don’t comment on specific channels.” At this point, it’s unclear if YouTube will begin to label ICYMI with a disclaimer in the same way it has for the RT YouTube channel.