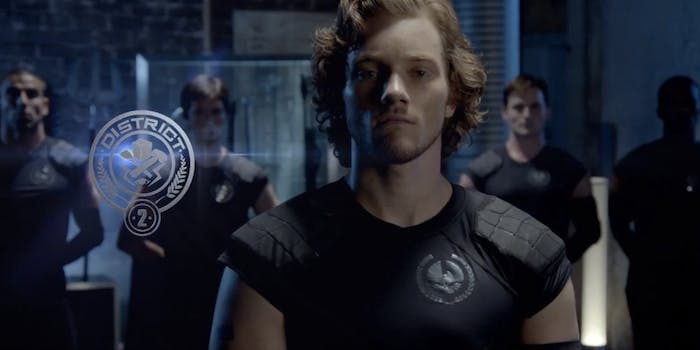 Five-episode series brings the world of YouTube to Panem.

The Hunger Games has a long history of inventive marketing plans, from sorting fans into competitive Districts via social media, to managing a fashion-based Tumblr presence celebrating the outrageous looks of The Capital. The latest move follows the changes in the story and reflects the political propaganda of the Mockingjay Part 1 storyline.

Lionsgate has partnered with several YouTubers to create District Voices, a five-episode series that brings Panem to life through the eyes of creators aligned with a District’s unique industries. The first installment celebrates District 8 with Rob Czar and Corinne Leigh, co-helmers of the Threadbanger YouTube channel, who show how to best make use of excess Peacekeeper armor. Subsequent episodes will roll out the rest of the week, with Shane Fazen showcasing Peacekeeper training as District 2, Derek Muller of Veritasium doing electricity demonstrations for District 5, and iJustine of District 6 giving a glimpse into Panem’s transportation, among others.

“Our mission has always been to engage our Hunger Games fans in the most innovative and authentic ways possible,” said Lionsgate’s EVP of Digital Marketing Danielle De Palma in a press release.  “We cannot think of a better partner than these incredible YouTube stars, who truly bring new content to life in the world of Panem and extend our storytelling to online audiences in exciting new directions.”

Earlier this year Lionsgate launched Capitol Couture, fashion magazine built on Tumblr, to promote the film through glossy spreads and articles on Peeta and Joanna, the captured tributes. The YouTube series is part of Google’s Art, Copy & Code initiative, which helps brands connect with consumers through unique content experiences. It doesn’t get more unique than a YouTuber teaching you how to cook with fictionally sanctioned grain rations. The Hunger Games continues to surprise us with its marketing efforts again and again.