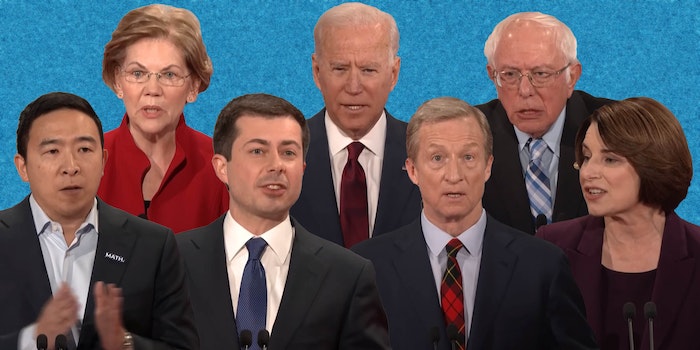 How to stream tonight’s 2020 Democratic debate

The debate comes amid a busy week in politics.

The eighth 2020 Democratic presidential debate will take place tonight in New Hampshire—and it comes after a dramatic week in politics.

Seven of the Democrats vying for the party’s nomination to take on President Donald Trump in the 2020 election will be onstage, just a few days after an Iowa caucus rife with technical issues that have led to a dead heat in the results between Sen. Bernie Sanders (I-Vt.) and Pete Buttigieg.

On top of that, the Senate voted to acquit Trump in its impeachment trial, and the president made a State of the Union speech.

It’s been a busy week.

Here’s what you need to know about, and how to watch, tonight’s 2020 Democratic presidential debate:

What time is the eighth 2020 Democratic debate?

The debate will begin at 7pm CT. It is expected to end around 10pm CT. It will be hosted by ABC News, Apple News, and WMUR-TV at Saint Anselm College in New Hampshire.

The debate will be moderated by ABC News’s George Stephanopoulos, David Muir, and Linsey Davis. WMUR-TV’s Adam Sexton and Monica Hernandez will also join them.

Seven candidates qualified for the debate. They include:

How to watch the eighth 2020 Democratic debate

If you want to stream the debate, you’re in luck: there are several options.

ABC News will have a live stream of the debate on: