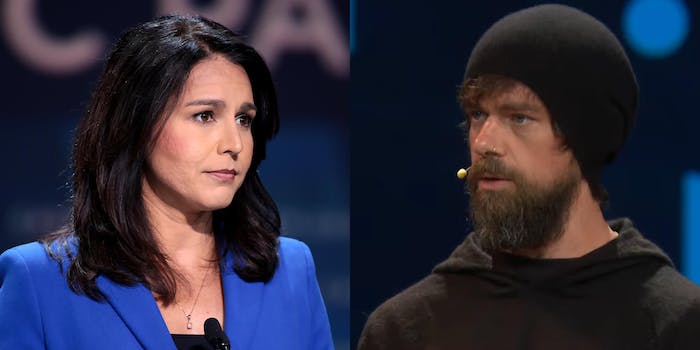 Gabbard has been critical of big tech on the campaign trail.

Twitter CEO Jack Dorsey decided not to host a fundraiser for 2020 Democratic hopeful Rep. Tulsi Gabbard (D-Hawaii), according to a new report.

Recode found that Gabbard’s team reached out to Dorsey to fundraise for her late last year. While Dorsey considered hosting a fundraiser with Reddit co-founder Alexis Ohanian, the Twitter CEO decided against it, not wanting to show a preference for a specific candidate, the news outlet reports, citing people close to Dorsey.

Over the summer, it was reported that Dorsey had donated the maximum amount allowed for individuals to Gabbard’s general election and primary funds.

While Gabbard was hoping for Dorsey to host a fundraiser, the Hawaii representative has been critical of big tech on the campaign trail.

She told the New York Times that she thought major companies like Facebook, Google, and Amazon should be broken up.

“I think that these tech giants like Facebook and Google have such monopolies and such power—and there have been examples of their abuse of that power,” she told the newspaper. “Both in invading and violating our personal privacy and civil liberty rights, as well as crushing any who seek to challenge their monopoly.”

Gabbard also sued Google for $50 million last year, claiming that she was unable to buy ads for six hours after the first 2020 Democratic presidential debate.

You can read all of the Recode report here.