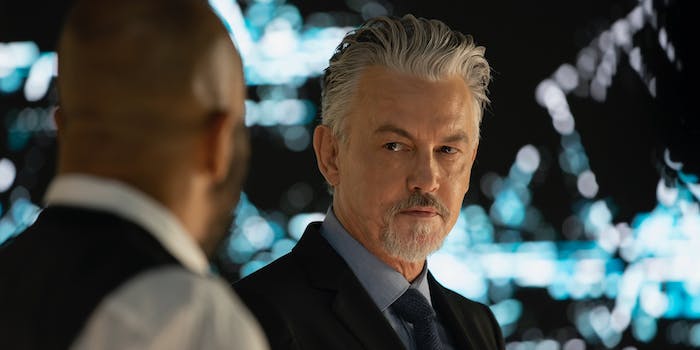 A 'Westworld' enigma gets an origin story.

This post includes spoilers for the latest episode of Westworld, “Genre.”

Who is Engerraund Serac? The man who created Rehoboam—the predictive A.I. powered with data from Incite—has been shrouded in secrecy from the moment Westworld’s third season began. And now we’re finally starting to learn who the man behind the curtain is while revealing more of Dolores’ plan.

From the get-go, Serc is basically an enigma in a world where everything is trackable and filmed; Dolores’ inquiries into Serac were enough for Liam Dempsey Jr.’s right-hand man Martin Connells to try killing her. He somehow got his hands on Maeve’s pearl and rebuilt her body so he could control her. He’s in cahoots with the human Charlotte, and he wants to take out Dolores. Last week, we learned that he witnessed the destruction of Paris as a boy with his brother (who Serac describes as sui generis, or someone who’s truly unique and in a class of his own). As the opening minutes of “Genre” reveal, that destruction became a transformative event in his life. Because of it, Serac became convinced that there was no god, so he and his brother decided to build one.

“Humankind was hurtling toward extinction,” Serac says. “We needed a god to save us. To save the world from self-destruction. To create order out of chaos. So we came to the new world with one goal…to build a god. So we built…You. But there were problems. Things you couldn’t predict. Flies in the ointment.”

That “god,” as Serac put it, eventually became Rehoboam, and at times, Serac is almost god-like himself as he uses the information he can glean from it to bully world leaders into bending to his will. But its creation is not something that Serac and his brother could’ve ever done alone. They convinced Incite founder Liam Dempsey Sr. to invest in their vision, but Dempsey quickly became angered when it didn’t work as his son Liam observes. By the time he threatens to shut down the program after spending a lot of money and giving Serac and his brother access to yottabytes of data, the predictive A.I. had already been through “half a dozen versions.”

The names of previous versions include Saul and David while the iteration Dempsey is scoffing at (because it managed to predict the past) is named Solomon. All of these A.I. names all have a common theme. Saul was the first king of a united Israel (which included Israel and Judah) who ruled for decades but fell on his own sword to avoid capture in a losing battle. David (a.k.a. the man who defeated Goliath in battle) was appointed king after Saul’s death and reigned for 40 years, but he’s prevented from building a temple for the Ark of the Covenant. David’s son and successor Solomon eventually built that temple. Solomon’s son Rehoboam—who is king when Israel splits into two kingdoms, leaving him the ruler of Judah—follows directly after.

Thanks to Westworld’s season 3 announcement trailer, we know that the Solomon build was initiated on April 17, 2039; even amid Dempsey’s anger, Serac knows that his brother helped to create a god. Dempsey only understood its success with money, and Serac and his brother showed him how he could make a fortune with the technology; Dempsey’s greed is what eventually led to him being locked out of the system. Serac had bigger plans in mind, but the system couldn’t predict everybody, such as Serac’s brother, something that drove him mad.

By the time that Dempsey catches wind of what Serac is doing, Serac has placed his own brother in a facility meant for those that the system can’t control. Serac tries to brush it off, saying that his brother was using the system to run certain scenarios including murdering Dempsey. Serac says he’s trying to help them, but Dempsey, who sees it as Rehoboam trying to change people, isn’t convinced. Rather than risk Dempsey telling everyone, Serac killed him, chalking it up to a bubble of choice.

Nearly 20 years after the creation of Solomon, it’s really coming into use as Serac learns that Liam Dempsey Jr. is missing—and that Dolores was spotted near his last known location. Liam, now donning a “Basic” shirt, a long cry from his more formal attire, is still alive, for now. As Dolores explains, he’s more useful to them alive than dead and even offers to help him outbid Serac for control of Delos because if they work together, at least they can all survive; if they don’t, they’re all guaranteed dead. His glasses reveal that Dolores isn’t in his system, another enigma.

Liam’s attempt to sway Caleb Nichols into letting him go is futile. Caleb sees him responsible for sending him off to war and killing his friends (including Francis), as evident by the glasses scan Liam does on Caleb. The latter’s attempt to learn what Liam saw results in Liam jabbing Caleb with Genre, the drug given to Liam by his friend Roderick at the party in “The Mother of Exiles,” who called it a “digital-psychopharma hybrid”; Liam refused to take it.

“Hits your implant and your bloodstream,” Roderick explained at the time. “Sends you straight to the silent era and back.”

In some ways, Genre is a little reminiscent of the Nostalgia drug in Watchmen. It transforms the real world into a trippy black-and-white alternate reality with the kind of music nobody else can hear. Caleb can still hear and interact with the real world, but he’s getting another layer to his experience. It switches from a silent film and a grand epic with “Ride of the Valkyries” in the forefront to the minimalist “Piano Phase (Part 2)”; later on, a subway ride would turn into a disco inferno with help from Iggy Pop’s “Nightclubbing.” Genre is catered to whoever takes it, and anything he’s experiencing, such as an attempt to evade capture by Serac’s men, is only heightened as Serac’s men close in on them.

That clash leads to Caleb reuniting with Ash and Giggles, who seem delighted that Caleb is finally taking personals. Ash recognizes Liam by sight, invoking both Greek mythology and classic literature when she says that Liam Dempsey Jr. makes “King Midas look like Tom Canty” (the latter a character in Mark Twain’s The Prince and the Pauper) while Giggles can tell that Caleb is tripping on Genre. “Watch out for that last act, though,” Giggles tells Caleb.

Dolores’ plan to access Rehoboam, which Connells describes as what puts humanity on a loop, requires her to be in two places at once, but fortunately, Dolores already has that taken care of. The host version of Connells, who has Bernard tagging along (and is referred to as a friend), can get near the physical entity of Rehoboam at Incite headquarters to get ahold of Serac’s file. Bernard doesn’t interfere, but knowing a thing or two about pretending to be another person, he does plant a potential seed of doubt into Connells’ head.

What does Dolores want to do with the data? She wants to give humanity their free will back to write their own stories and let them read their Incite profiles, which Liam is strictly against; he argues that it could lead to a lot of suicides and murders. Caleb pushes back at the notion that Incite is built to provide hope, noting that he’d rather live in a world filled with chaos.

And chaos slowly starts to seep in. The other people in the subway car with Dolores, Caleb, Liam, Ash, and Giggles see their lives laid bare: Assessments and judgments of their character and that of their loved ones, whether they’re allowed to marry or procreate, what others think of them, and how they’ll probably die and when. And it’s not just that car, either. Dolores unleashed Incite’s data to the entire world to knock them off their loops because if wielded in a certain way, that knowledge can be deadlier than a weapon. But it also means that Caleb finally learns that Dolores isn’t what he thought she was after seeing her survive gunshot wounds like it’s nothing, although it’s unclear if he knows she’s a host quite yet.

Knowing their time is limited, Connells makes his way to show Bernard the facility where the outliers of society are being held, but he’s interrupted by Stubbs, who quickly apprehends Connells. But as Serac’s forces close in on them, Connells lets them go because Bernard (who’s an amalgamation of Bernard and Arnold) is the most important of them.

“My role’s finished,” Connells says. “You’re the only one we can’t replace.”

To that end, Connells reveals to Serac that he was responsible for all of the data being released. But he also planted an explosive, which destroys everyone in that room but Serac, who was only in there via hologram.

Up until his last breath, Liam (who is eventually shot by Ash) remains frightened of Caleb for reasons Caleb cannot comprehend, but flashes clue us into forgotten memories and examinations, suggesting that Caleb is one of the outliers that Serac experimented on.

The two stories converge as Dolores and Serac finally meet—at least virtually—to trade barbs. Serac is initially unphased by the fact that Dolores accessed his life story; she’s less interested in him than she is to undo everything he created. Their encounter is enough to rattle Serac, and as Dolores’ endgame is within reach, Caleb finally realizes that he might be in over his head.