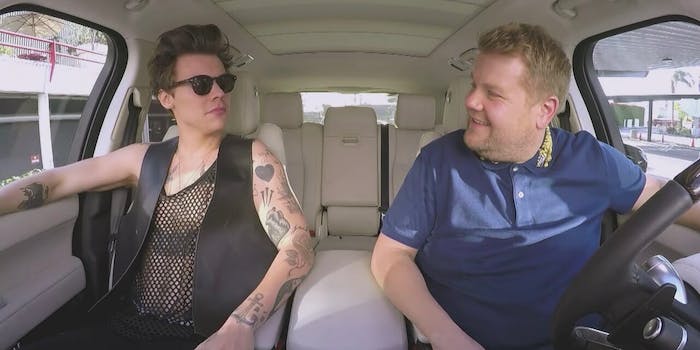 One of his songs makes him emotional but ‘in a cool way.’

The last time Harry Styles helped James Corden get to work in “Carpool Karaoke,” he was with the rest of One Direction. But now that Styles’ first solo album is out, he and Corden are back together belting out tunes on The Late Late Show.

Settled in the car, they sang a couple of songs from Harry and mixed it up with Outkast, a classic Lionel Richie and Diana Ross duet, and—with Styles’ new film Dunkirk coming out soon—reenactments of classic movie scenes from Notting Hill and Titanic. Their harmonies and chemistry really drive the performances home, and although Styles took issue with always having to play Julia Roberts, he really sells it. (He also pulls off almost any shirt you can throw him.)

Now draw him like one of your French girls.

And if you’re looking to hear more of Harry, Styles performed another song from the album, “Kiwi,” on the Late Late Show stage.