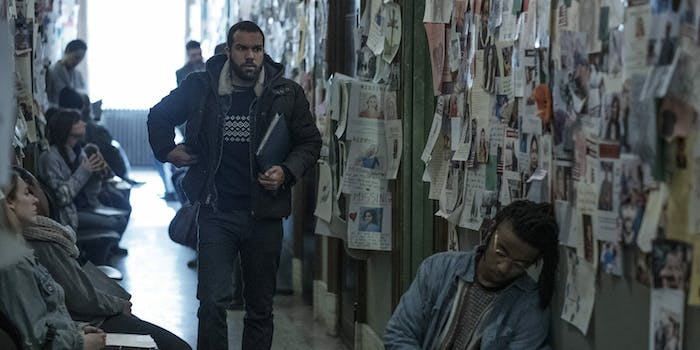 'There's so many people experiencing exactly this right now.'

Warning: This article contains spoilers up to episode 9 of The Handmaid’s Tale.

The first season of Hulu’s The Handmaid’s Tale, like in Margaret Atwood’s famous novel, is still very much Offred’s story. It’s her flashbacks, motivations, and fight we become invested in. Many of the season’s major events—her life from before as June, the rise of Gilead, and the life of a Handmaid who is raped once a month in hopes that she will become pregnant—are largely seen from her viewpoint. But unlike the book, we’re able to expand past the print narrative to see what’s happening outside of Offred’s world and her corner of Gilead.

The television medium gives the audience insight into the show’s vibrant periphery characters. It managed to humanize Serena Joy, who is powerless in the society she helped to create. We learned more of Ofglen (later called by her real name, Emily) and the far-reaching extent of Gilead’s cruelty toward the LGBTQ community. It showed how Nick, the Waterfords’ driver and an Eye, was offered a helping hand by the group who overthrew the U.S. government.

And in one of the show’s big twists, it’s finally revealed what happened to a character many assumed dead.

In one of the show’s very first scenes, we hear gunshots as Luke, June’s husband in the time before, tries to hold off the Guardians while June and their daughter Hannah run for it. We get to know him vividly through Offred’s flashbacks, often feeling like a fully formed character rather than just the memory of what she had thanks in part to a riveting performance from O-T Fagbenle, who’s appeared on HBO’s Looking and numerous British TV series such as The Interceptor and Grownups.

It’s not until more than halfway through the season—and through an unlikely ally—that we learn Luke has been alive this entire time. The show’s seventh episode, “The Other Side,” is a spotlight on Luke and reveals how he survived his encounter with the Guardians and escaped to Canada with a group of refugees fleeing the U.S. It’s through Luke’s eyes that we finally see parts of the world outside of Gilead and the extent of which its totalitarian policies affect other marginalized communities.

The Daily Dot spoke to Fagbenle ahead of the Handmaid’s Tale season finale about playing the character and not a flashback, how he researched families separated by war during WWII to prep for the role, and what he thinks The Handmaid’s Tale could explore in its second season.

Daily Dot: What was your approach to Luke in the show compared to how he’s portrayed in the books?

O-T Fagbenle: I think, you know, fundamentally, my responsibility is to [showrunner] Bruce [Miller]’s script, and he wrote this amazing script. And that really fills out Luke to become this kind of three-dimensional character who does exist—especially in the later episodes—outside of Offred’s or June’s POV [point of view]. So that made things a lot easier, that it wasn’t just a subjective telling of a character even though in some of the earlier episodes it’s all seen as her flashback. As an actor you can’t play a flashback, you can’t play someone’s memory, you just have to play each circumstance as if it was real and understand that person’s point of view.

At the very beginning of The Handmaid’s Tale we heard—but never saw—gunshots, which leads Offred to believe that Luke is dead. Before the show revealed that Luke was alive, did people ask you about it?

To be honest, people did ask but you’d be surprised. Most people I think assumed that Luke would only exist in flashbacks and that he wasn’t alive, so I think it was a surprise for quite a few people—but I would get asked a lot. But I don’t want to spoil anybody’s experience of watching it so I would climb around some vagaries and, you know, try to lead them on the knife’s edge.

What was your reaction to learning what happened to Luke?

It’s a very powering scene to try and imagine, really. What’s crazy is that there’s so many people experiencing exactly this right now. I think, very often, when we talk about refugees in the media it’s kind of this, these faceless people, that some people perceive as a threat. And it was quite exciting to play—quite fulfilling, I should say—to play a character that I think most of us can relate to. And see him going through the things that people from Syria and other places are going through right now. And it’s just terrifying to think of that.

A lot has been said about the parallels to the real world, not only to the push to restrict women’s reproductive rights but also the Syrian refugee crisis and stories emerging of refugees fleeing the U.S. for Canada.

It’s certainly interesting, the parallels. Obviously if you’re an American, then you’re naturally going to draw the parallels to what’s going on in America right now. What’s interesting is it’s being shown all around the world and so many people are finding correlations to what they’re experiencing, whether that be in the Middle East or in England or in Europe. They have similar parallels to them and it really speaks to the skill of the writers—Margaret and Bruce and the writing team—that they can write something transcendent enough that everyone feels a personal connection to it.

Whether it be the struggle of a mother trying to keep her family together or people facing an extreme misogyny in certain countries or facing a political system that doesn’t seem to respect women as much as it should.

I’ve also seen discussion popping up about the casual misogyny demonstrated by some of the characters, including Luke.

That’s one of the things I’m most excited about with this show is how it can be, for many people, a way of getting a conversation started about all the ways, large and small, that men and the social structures they create undermine women.

We see Luke escape Gilead and then return to him three years later. Did you come up with any ideas on how he spent those three years or was that told to you? Or both?

I did some research on people who’ve experienced similar situations to Luke. And when you are dealing with armies, the fact that they’re out to kill you, it really diminishes the amount of options you have to get back with your family. And this is how you hear, for example through the second World War, that families were torn apart and didn’t see each other for 10 years, 15 years, 20 years, and it’s not for lack of love. It’s not for lack of them being desperate to be back together, but there are some forces which rip people and families apart, and into torment.

The flashbacks have been a big part of the show, both in terms of character and the setting. How important are they to telling the bigger story?

I think the flashbacks are necessary in many ways to remind us that these people in this hyper-realistic world came from us at where we are now. If we don’t look after the world and our politics that we could find ourselves in a situation to defend it that badly. I think it kinda grounds the show, and I love watching the flashbacks, I love watching June and Moira and I know there will be some exciting ones to come in season 2.

Have you talked about season 2 yet?

There’s still lots of things in the novel which haven’t been explored which exist but in the novel but can be expanded in the second series. For example, what’s going on in the colonies or what life is like in Toronto and in these refugee cities, so that’s an interesting part of it. But obviously with what happens with June and Offred I can’t spill too many things because they’ll probably chop off an arm of mine.

Without giving away any spoilers, what do you hope happens for these characters in the next season?

You know what? Whatever I come up with, it’s not as exciting or twisty-turny and revealing as what Bruce Miller, our writer, comes up with so I’m happy to let go of speculation and just jump on the ride of whatever he creates.

Is there anything you can tease about the season finale?

Elisabeth Moss is unbelievably good in this episode. It’s outrageous the amount of talent that’s packed into that body of hers because it’s mind-blowing and I can’t wait for people to see it.