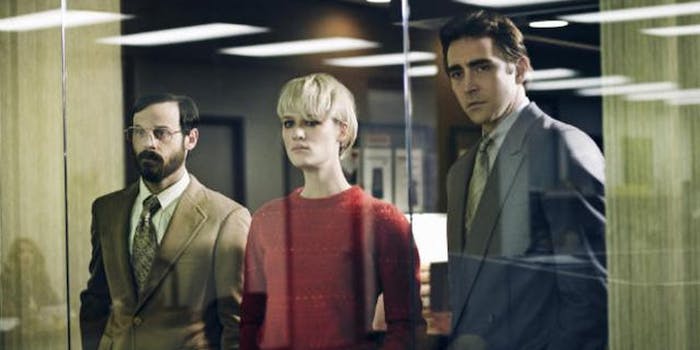 How do you market a show about tech's past to the Internet now?

There’s been a lot of talk about how AMC’s new tech drama, Halt and Catch Fire, is getting in the Sunday night elevator just as Mad Men is getting off—at least until the second half of the final season. “Is this the new Mad Men?” we whisper, breathlessly, into the void.

It’s easy to draw dotted lines between the shows; both attempt to dramatize the history of two industries—computers and advertising—within two very important decades for commerce and innovation. In fact, Mad Men recently acquired a new cast member, in the form of an IBM System/360 computer.

Halt and Catch Fire’s May 18 pilot foreshadowed what the season might bring: Lee Pace plays Joe MacMillan, a Bryan Ferry lookalike and former IBM employee hired at Cardiff Electric, who elbows fellow employee Gordon Clark (Scoot McNairy) into reverse engineering an IBM computer with him, in hopes they can beat the computer giant at its own game. Cameron Howe (Mackenzie Davis) is the smart young student they rope in to help with the coding. Kerry Bishé plays Gordon’s wife, Donna.

It’s set in Dallas, Texas, one of the real nexuses of the early ‘80s computer revolution—the “Silicon Prairie.” North Texas’s Dell and Texas Instruments were among IBM’s competitors. In the show, Donna works for Texas Instruments; they even have a Speak & Spell, one of the company’s most popular toys, which has been deconstructed by many an aspiring engineer since its debut.

Writer and co-creator Christopher Cantwell grew up in Plano, a suburb of Dallas, and had some experience with Texas’s ‘80s tech boom. Cantwell’s father was a software salesman when Christopher was a kid, so he asked his dad to fill in some of the blanks. Cantwell started scripting a new kind of oil boom, one where “closers” and engineers worked together to test the limits of their bubble, to see how far into this brave new world they could venture.

“He arrived in ‘82, right when personal computing was taking off,” Cantwell explains. “And from there, we started to research what was going on in Texas at the time, and stumbled upon this story of reverse engineering on an IBM PC, which was first done by a company called Compaq.

“And we thought, let’s tell the story you don’t know, of what was happening there. Then it became a story of people looking for a second chance, who have maybe been washed out of the bigger hubs of the time. Let’s thrust them together in this wild West.”

The show’s engineering took a little more time. Cantwell and co-creator Christopher C. Rogers met in California, where both were working marketing jobs at Disney. In their free time, the two started writing scripts together, though neither had experience in a writers’ room. They shopped the pilot for Halt and Catch Fire to several networks, and stared down a lot of dead ends. They finally ended up at AMC, and Cantwell says the vibe was different: The execs had the script “in their hands.” AMC gave it a green light in late 2011.

The early ‘80s tech revolution mirrors the current Silicon Valley rumpus in many ways, one being gender disparity. The show’s portrayal of women seems promising from the pilot: Donna’s not just the worried wife chasing her husband’s regrets. They seem more like a team, and the pilot hints that they once programmed a computer together. Though Cameron and Joe have an early scene in which his misogyny is exposed mid-tryst, she represents a character not often seen in Silicon Valley boardrooms.

Cantwell recently wrote on his Tumblr about how important it was that they didn’t fall into stereotypes:

“HALT premieres in five days. Are the female characters perfect? No. Does the first episode pass the Bechdel Test? No (we do in Episode 2, though…). Did I, my partner, our showrunner, our exec producers, the network, our room of seven writers endeavor very, very hard to write authentic women who aren’t mere accessories to a male story? Yes. I believe we did. I love our female characters. Did we screw up with them at times? I’m sure we did.

“We created these characters as an attempt to portray realistic human beings who are women.”

“From the beginning, we didn’t want Donna Clark to be a mere accessory to [her husband’s] story,” Cantwell says. “When we cast Kerry Bishé, and saw what she brought to the character in the pilot, you just wanted to write to her. And you wanted to see someone like Donna struggling with the ‘80s universe of feminism, which is, ‘OK, you want to work? That’s fine, work, but you’re going to be [working at] home too.

“Cameron is on the opposite spectrum from Donna. She’s of the new guard, she represents what’s coming. She’s a proto-hacker, a punk. Someone who sees technology a bit more like we do today, and she’s thrust into the hierarchy that’s very foreign to her.”

The social media marketing for the show has been inspired. AMC partnered with Tumblr, and screened the show for an exclusive Tumblr audience. AMC is streaming the pilot episode on its Tumblr until May 31. Remember that Fine Bros. video of kids trying to understand old computers? Another bout of synergy from the show’s promotional department. The video has more than 7 million views.

Sima Sistani, Tumblr’s new director of media, says it was an organic conversation, and AMC wanted to integrate their Tumblr into the larger community.

“It really made a lot of sense for them to try to think of new and interesting ways to promote the show, and fill their fandom on Tumblr,” she says, “given that the show is about technology, and we have such a passionate community of influencers.”

Sistani came on with Tumblr in January, with the specific task of partnering with media and entertainment companies. She explains they’re currently doing a screening of the new season of Orange Is the New Black for a group of “influencers,” and she hopes the initiative can “connect these artists with the greater creative community on Tumblr.”

“I think AMC has done a really fantastic job of building fandoms for their shows: The Walking Dead, Mad Men, Breaking Bad. I don’t think there’s a particular genre you have to be in to build a fandom on Tumblr. … Any niche interest, there’s someone for you to connect with.”

While some of the pilot’s dialogue felt a bit stiff, the characters are encouraging. The show’s debuting in the midst of the Internet and entertainment’s love affair with tech and its past. It will be interesting to see whether Halt and Catch Fire‘s viewers get in the elevator.