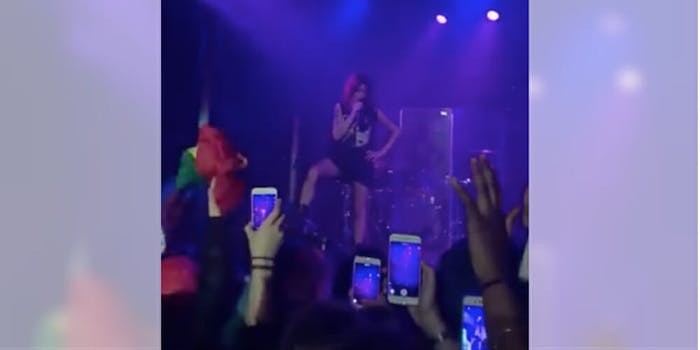 She wore a shirt that had the now-viral of the photo of the bloodied women on it.

Halsey paid tribute, during her concert, to the two women who were reportedly attacked on a London bus.

The lesbian couple was attacked after refusing to kiss for a group of men. Halsey wore a shirt that had the now-viral of the photo of the bloodied women on it.

She assured the crowd that her concert was a safe space, and then encouraged them to continue supporting the LGBTQ community–even after Pride Month is over.

“The sad reality is after the Pride parades are over and after the bars close their Pride nights, when the glitter is being swept out of the streets, a lot of people get on those trains, get on those buses, and try to wash the rainbows off their bodies and peel the stickers off their clothes,” she said to the crowd in London.

Halsey getting a room full of queer kids to scream “I WILL NOT BE AFRAID” after two women were beaten for being gay in the exact same town she’s performing in. She’s wearing a shirt with their faces on the front, and “FUCK YOUR STRAIGHT PRIDE” on the back. pic.twitter.com/VssWprS3gX

More than 2.5 million people have watched the video, posted on Twitter, of her heartfelt speech.

She also addressed the proposed “straight pride” parade, which is supposed to be held in Boston.

The back of her shirt read, “Fuck your straight pride.”

“So when the people around the world ask the question, ‘why isn’t there a straight pride parade?’ The answer is: because if there was one you wouldn’t have to get on the bus and be terrified of getting fucking beaten and killed afterwards,” Halsey said.

i’m not even part of the community but i’m literally crying rn. the fact that people have to go through such persecution saddens me so much and for what? for loving? oh my god i cant stop crying

This is what support looks like. Not a rainbow label once a year. It’s tangible actual action and someone saying I am here. I stand by you.