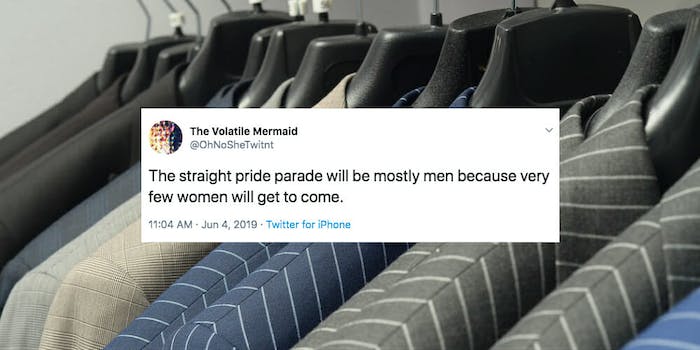 Smash Mouth told the group to 'F*CK OFF.'

Heterosexuals are finally getting the representation they have long been lacking.

A group of heterosexual men are trying to launch a parade dubbed “straight pride” to celebrate their straightness in conjugation with the LGBTQ Pride Parade. Twitter is absolutely not here for it.

The straight pride parade will be mostly men because very few women will get to come.

The city of Boston is a straight pride parade tbh https://t.co/Lx07PEEWxT

the straight pride parade in boston should have a completely straight parade route, i thought i'd save them some time by drawing one pic.twitter.com/afbUi8mtnu

The group behind the groundbreaking concept is none other than the far-right led organization Super Happy Fun America.

While preparations for the parade have been ongoing for a while now, most of the internet found out about it after the group’s vice president posted about it on Facebook in May.

Far-right personality Mark Sahady detailed how the group filed a discrimination complaint against the city for blocking their efforts. Afterward, Boston authorities seemed more willing to work with the group, proposing street closures to allow for floats and vehicles on August 31, Sahady wrote.

“This is our chance to have a patriotic parade in Boston as we celebrate straight pride,” Sahady posted, along with a map of the proposed route.

Super Happy Fun America is an organization committed to embracing “the vibrancy of the straight community,” according to its website.

Tuesday morning, Carolyn Ryan, an editor at the New York Times shared a screenshot of the Sahady’s post via Twitter. It quickly went viral, leading “straight pride parade” to trend.

As expected, none of the attention has been particularly flattering.

On top of mocking the very idea that a straight pride parade is needed, Twitter users began proposing potential floats based on well-known conservative people or companies. Chick-fil-A sandwiches, Tomi Lahren, and AXE body spray all made several people’s lists.

– Charlie Kirk eats Chick-fil-A sandwich in back of Uber

Floats for the Straight Pride Parade…

– Charlie Kirk eats Chick-fil-A sandwich in back of Uber

Even the meme-heavy band Smash Mouth weighed in to tell the group to “FUCK OFF.”

In a Facebook post from December, Sahady insisted that the Proud Boys were “not a racist group” and that the only extremists in attendance were liberals.

He later stated the straight pride parade was a “patriotic parade,” the same kind of nationalistic rhetoric that appeals to many far-right groups. If the memes that began circulating were any indication, Twitter users weren’t convinced of the group’s motivations.

let's see who the straight pride parade really is pic.twitter.com/P2HHCq24BK

The Straight Pride Parade exists for the same reason as Men’s Rights and White Pride: to denigrate and belittle the progress made by the marginalized. It’s nothing less than the mockery of the oppressed and should be treated as such.

The Daily Dot has reached out to Mark Sahady.