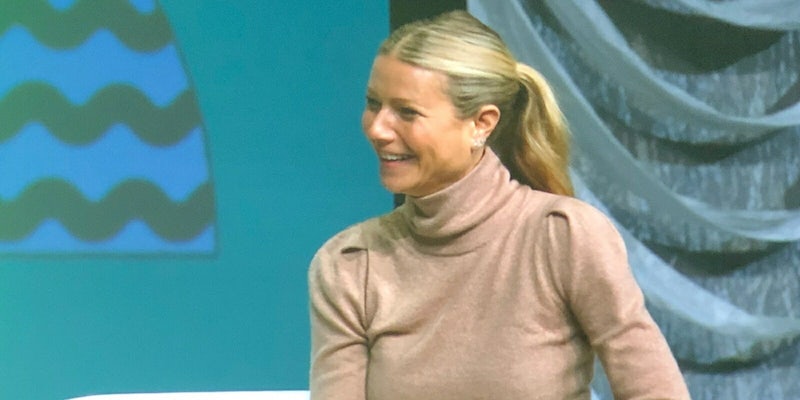 Gwyneth Paltrow knows you hate her

The Oscar-winning actor's Goop empire is a force. But she's ready to laugh at it.

Maybe Gwyneth Paltrow seems blissfully self-unaware to you. When she and former husband Chris Martin divorced, they called it a “conscious uncoupling,” drawing eye-rolls across the universe. She named her first child Apple—which, for some reason, everyone hated. She sold $66 jade eggs for vaginas that she claims could better your sex life and your menstruation cycle but which have been panned by gynecologists in Health and the New York Times.

At her SXSW session on Monday, Paltrow dropped a Buddhist quote on the packed audience in the Austin Convention Center. She told of a cocktail party in London. She referenced her former relationship with Brad Pitt. She mentioned her vision board.

So yeah, if you think Paltrow is often tone-deaf or pretentious, you could make a good argument.

But in the past few days, Paltrow—the creator and CEO of the health and lifestyle company Goop—has tried hard to show that it’s not true. She shared her vulnerabilities and her doubts in front of thousands of people on Monday. She nearly was brought to tears when talking about her late father to CNN’s Poppy Harlow, who interviewed her at SXSW. She told the story of how Amazon creator Jeff Bezos refused to respond to her emails (twice!).

And she made herself the butt of the joke on last weekend’s Saturday Night Live playing a flummoxed manager at Goop who was trying to help her equally flummoxed employee explain what the heck was actually in the product Goop was selling.

“I’ve thought that with this whole journey from a change of career to trying to build a company, it’s really important to have a sense of humor about everything in life,” Paltrow said on Monday. “As they say in Buddhism, to live is to struggle, to suffer. As you grow up, you become more self-aware.

“We know we’ve written about things that have made people uncomfortable. But over time, the things that were shocking or controversial have been widely adopted in the culture. We know that if you’re going to write about a vaginal steam that it’s funny. But at the same time, we like to identify those things. We like to ask questions about them.”

That’s true for part of her business where content creators write about “6 Simple Reasons for the Keto-Curious” or “3 Chic Weekend Outfits for Moms.” But people are still angry at her for selling massively expensive clothes (these $780 Charlize cropped pants, for example), for deceptive advertising dozens of times, and, most egregiously, for selling so-called health products that might actually be dangerous for you. Including the jade egg for women.

“I read the post on Goop, and all I can tell you is it is the biggest load of garbage I have read on your site since vaginal steaming,” Dr. Jen Gunter, an obstetrician, wrote on her personal blog, via the New York Times.

Paltrow said Goop has learned from its mistakes—including the $145,000 fine Goop had to pay for the jade egg debacle.

“We just thought we were writing this blog,” said Paltrow, whose company will debut a six-part docuseries on Netflix focused on “spiritual and physical wellness.” “It was a painful lesson to learn at the time.”

These are a handful of the reactions to the announcement Goop is getting a Netflix show. But we're all going to end up watching it, aren't we, so it will get a huge debut and I imagine there'll be some contextless stats from a spokesperson deeming the whole thing a success. pic.twitter.com/oX6oT3nzGf

On Monday, though, Paltrow and Harlow focused most of their interview on Paltrow’s journey in creating and running a company that has grown to 250 employees and is now valued at $250 million. Particularly as a mother who left behind her hugely successful vocation to move into a business world where she had little knowledge and virtually no hands-on experience.

But no matter what you think of her, Paltrow has taken this business from her kitchen table in 2008 to a successful national company that is thinking about eventually branching out across the world. And she bristles at those who have asked if there’s a secret man who’s actually running the business.

“It’s been implied to me,” she said. “[Goop’s head of communications] has had male reporters who have literally asked who is the ‘silent male.’ I said, ‘That is unsurprising and sad. But illuminating.’”

That perhaps is one reason why Paltrow needs her sense of humor, why she has to laugh at all the accusations that she’s dangerous and that she doesn’t know what she’s talking about and that she can take her jade egg and shove it. That’s why she went to SNL with the teenaged Apple so her daughter could see her Oscar-winning mother return to the stage.

“She finally thought I was cool,” Paltrow said.