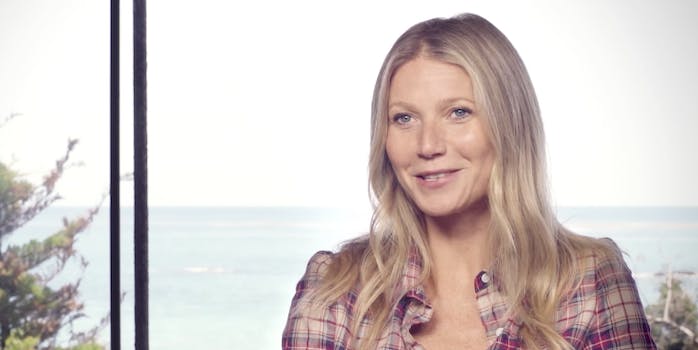 Screengrab via Net a Porter/YouTube

Gwyneth Paltrow’s Goop gets called out for ‘deceptive’ advertising

What the heck is 'earthing' anyway?

If you’ve ever found yourself questioning how medically accurate Gwyneth Paltrow‘s wellness brand Goop has been over the years, you’re not alone.

Industry watchdog group Truth in Advertising (TINA) announced Tuesday that after “thoroughly investigating” Paltrow’s lifestyle website, it was able to find more than “50 instances in which the company claims, either expressly or implicitly, that its products (or those it promotes) can treat, cure, prevent, alleviate the symptoms of, or reduce the risk of developing a number of ailments.” In other words: It thinks Paltrow is making promises about these home remedies that can’t be backed up by research.

“The problem is that the company does not possess the competent and reliable scientific evidence required by law to make such claims,” the advocacy group wrote in a blog post. In one blog post, Goop dubs walking barefoot “earthing,” and claims it might help cure your arthritis, insomnia, and depression. At the end of the day, how responsible is this brand for the health claims it’s making?

People magazine reports that TINA has been investigating Goop since Aug. 11, when it contacted the company about “unsubstantiated, and therefore deceptive, health and disease-treatment claims.” In the message, the group reportedly instructed Paltrow and Goop to make certain changes to their marketing language by Aug. 18, in order to be more transparent about the actual medical benefits of any products they were promoting.

While some minor tweaks were apparently made, TINA didn’t find them satisfactory, so the group filed a formal complaint letter with the California Food, Drug and Medical Device Task Force this week.

As Jezebel points out: Goop’s yoni eggs, magic “dusts,” and anti-anxiety stickers are all part of a wellness trend that is quickly saturating mainstream culture. The treatments Paltrow’s company is pushing aren’t medicine, but if the wording on the packaging promises they’ll keep you in optimal health, how are her fans supposed to know?

The group recently called out other high-profile celebrities like Diddy and the Kardashians for not tagging their paid Instagram posts more clearly.