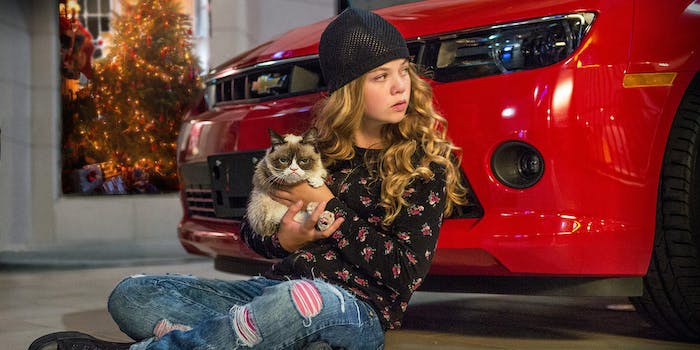 Welcome to an 85-minute commercial for Grumpy Cat hats, Cinnabon, and Camaros.

Memes used to be inside jokes, and they were funny because they were so incredibly stupid that they felt safe. It once seemed crazy to think that a photo of a grumpy-looking cat could ever be used to try and subversively advertise Cinnabon and Camaros, but now that memes have gone mainstream, it’s clear that was a naive belief. Now we know that anything we’ve ever found amusing can be used to sell Cinnabon and Camaros—and that maybe grumpy-looking cats are the most likely of all candidates.

Which is why it makes sense that Lifetime has paired with Grumpy Cat Limited to produce an 85-minute commercial for Grumpy Cat hats (and Cinnabon and Camaros) with Grumpy Cat’s Worst Christmas Ever. It’s a real trip down memory lane, a strange brew of stuff like Grumpy Cat awkwardly held in front of a green screen while the Keyboard Cat video plays in the background. But you won’t scratch the same nostalgic itch with this as you would with, say, The Lego Movie. It’s more like a piece of evidence in a trial against something you used to enjoy. It makes you wonder: If this movie’s the endgame, the high-water mark of a meme’s existence, should we try even harder to ignore the remaining memes in our Facebook feeds? Is Grumpy Cat’s Worst Christmas Ever a punishment for holding onto the concept for too long? Probably. But I watched it, and now you don’t have to. Unless it’s on TV and the remote is out of reach, in which case I might slightly recommend it. It’s also probably also fine for kids, as long you remember to change the channel after it’s over.

Grumpy Cat’s Worst Christmas Ever is an origin story, kind of like Iron Man, Batman Begins, or The Amazing Spider-Man, but with Grumpy Cat stuck in a pet store called Whiskers in a large indoor mall that is, according to the exterior shots, located inside a strip mall. A cruel businessman wants to see Whiskers closed so he can open a chicken restaurant in its place. For some reason, this business man is played by a 15-year-old wearing a suit and carrying a piece of luggage instead of a suitcase. Next to the fact that the mall is shot entirely in shallow focus to avoid showing any store names, and the fact that the film skips animating the animals’ mouths, the suitcase is probably the smallest of the film’s budgetary concerns. But it might be the funniest one.

Besides Grumpy Cat, there are other animals in Whiskers, too, like a snake that’s a gypsy and a hamster that’s skeptical of the snake. These animals aren’t too important, although there’s one scene in the third act where they all team up and attack some Bad Guys, resulting in the snake being thrown at a wall and subsequently disappearing from the film, leaving us to conclude that it’s probably dead.

The one animal that is important is the Million Dollar Dog, because the owner of Whiskers plans to sell this dog to “keep Whiskers open for a long, long time.” That’s ostensibly a good thing, because it’s the only place that the protagonist, Crystal, feels truly accepted. Crystal is around 13, still too young to realize that mall pet stores are extremely depressing, and her schoolmates all hate her. Things are rough for Crystal. Her mom keeps telling her to make friends, but her mom works at the mall, and that’s unfortunately every young person’s favorite place to call Crystal a dork.

Eventually, Crystal meets Russell Peters, who’s dressed as Santa Claus and looking half-drunk on a bench in the mall. He tells her that he usually dresses as Santa Claus at another mall, but that he’s filling in for somebody today, and then he tells her to toss a Christmas coin into this mall’s fountain and make a wish. (Later, we learn the mall he’s from actually closed down many years ago, which can only mean one thing: He’s a ghost. Which is good, because the idea of there being multiple malls in this town might have threatened to confuse this otherwise water-tight narrative.)

It turns out that Crystal wishes for a friend, which is a sweet and humble wish that the ghost grants by allowing her to hear Grumpy Cat talk, which is shocking because she talks with Aubrey Plaza’s voice. It’ll probably get Crystal institutionalized in the long run, but it’s a favorable thing for the time being, because it results in her sneaking away from her mom’s work-related Christmas party, breaking into the mall, and helping Grumpy Cat defend the Million Dollar Dog from burglars. Crystal’s mom thinks that she’s off making friends somewhere at the party the whole time, because she’s still in denial about everybody hating Crystal so much.

The burglars are two wannabe rock stars that want to buy a tour bus, and a mall security guard whose evil motive is to buy a small house that he can retire in. They’re the sort of criminals that would really get under Steven Seagal’s skin. Crystal shoots them with paintballs, hits them with gardening tools, and drives a Rascal scooter. Grumpy Cat ultimately does nothing in the struggle, which means that it’s entirely possible that Crystal is just hallucinating having heard the cat talk in the first place. This raises a lot of questions. Was this whole story just Crystal’s fever dream? Did Whiskers ever even exist?

Like Inception’s spinning top, these questions will surely be debated for years to come, hopefully in the form of extremely threatening tweets. In the meantime, we can probably look forward to a whole slew of wonderful meme-related films. Maybe we’ll get Good Guy Greg’s Best House Party, where we can finally learn how Good Guy Greg got that joint that he’s smoking. Maybe we could get some sort of Confession Bear film, but I think he may have already appeared in Milo and Otis.